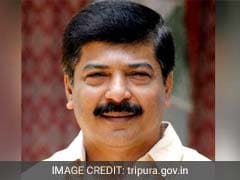 Agartala: Days after Trinamool Congress supremo Mamata Banerjee hinted that some Tripura party leaders went to New Delhi to meet central BJP leaders, a Trinamool MLA on Saturday declared that they would not join the saffron party but were instead keen to build an "anti-Left maha jot" or grand alliance to oust the ruling Left in Tripura.

"We would not join BJP (Bharatiya Janata Party). We are seriously keen to build an "anti-Left maha jot" to oust the ruling Left Front in Tripura in next year's assembly elections," Trinamool Congress (TMC) main leader in Tripura, Sudip Roy Barman, said.

Addressing the party workers and leaders, Mr Barman said the BJP on its own has no capability to win a single seat in Tripura.

Mr Barman's announcement came amidst reports of many leaders and workers of parties, including the Trinamool, joining the BJP during the past several months.

Surajit Datta, a five-time Congress legislator, and Ratan Chakraborty, who was a minister in the Congress government (1988-1993), joined the TMC many years ago and shaped the party in the Left-ruled state.

Mr Barman however denied Banerjee's observations and said that they went to Delhi to meet Prime Minister Narendra Modi to apprise him about certain issues of Tripura, including chit fund related matters. PM Modi, however, did not meet the TMC leaders and legislators.

"All the senior leaders and MLAs of Tripura have attended the April 21 party conference in Kolkata where Miss Banerjee was re-elected Trinamool Chairperson for six years," he added.

Mr Barman along with five MLAs and a large number of leaders and workers had quit the Congress and joined the TMC, opposing the Congress' alliance with the Left in the West Bengal Assembly elections last year.

He was accompanied by TMC's Tripura unit President Ashish Saha and other party leaders, said that Trinamool Congress is the real opposition party and unlike the BJP had organised a series of movements against the Left Front government.

"BJP has huge money. To get money and benefits, some people are joining that party. Without TMC no party in the state will be able to defeat the Left in Tripura," Mr Barman said.

Promoted
Listen to the latest songs, only on JioSaavn.com
He later termed the meeting as a "courtesy meet".

The 60-seat Tripura assembly elections are likely in February next year along with Nagaland and Meghalaya.