Not in habit of shouting, this protest is needed: AAP's Ashutosh 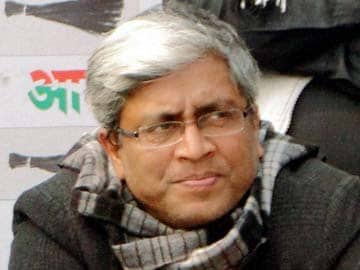 New Delhi: Delhi Chief Minister Arvind Kejriwal has said he will not truncate his protest in the heart of the city against the union government and the Delhi Police. For the second day in a row, four metro stations were closed as a result of his sit-in. Yesterday, huge traffic jams were reported during rush hour as a result of his demonstration. (Read)

The chief minister's Aam Aadmi Party or AAP wants four cops suspended because they refused to follow orders by the Law Minister Somnath Bharti to make a series of arrests. AAP also wants the control of the Delhi Police to be transferred from the union Home Ministry to the Delhi government. Ashutosh, a journalist who recently joined AAP, spoke to NDTV.com about why the party feels a public protest is necessary.

NDTV.com: What is the message that AAP wants to give the people of Delhi right now through its protests?

Ashutosh: Government is there for the people. Government knows its responsibilities and is working for the welfare of the people.  (Blog: Why I joined AAP by former journalist Ashutosh)

NDTV.com: AAP leaders like you were seen shouting at the police last evening at the venue of the protest. Is this not the sort of attitude of arrogant entitlement often displayed by Delhi politicians that AAP had vowed to fight?  (Watch: AAP leaders shout at cops, allege supporters are being detained, beaten up)

Ashutosh: We are not in the habit of shouting at people, but if a cabinet minister (Saurabh Bharadwaj) is detained by the police without reason and a few volunteers were beaten black and blue, what do you expect us to do ?

NDTV: Why is the AAP protest continuing even though the Aam Admi is being inconvenienced? There are traffic jams, people can't use the metro.

Ashutosh: This question should have to be asked to Mahatma Gandhi because he is the one who invented this to register his protest with the establishment. People understand these protests are not for a selfish cause, but for a larger cause. We should ask two questions. If any female member of a family goes out, aren't we restless till she comes back? Unfortunately, Delhi has a reputation where women are not safe, crimes against them are big. This is happening because the police is not doing its duty, they are not accountable to the elected government and are thoroughly corrupt from top to bottom. When the people on the road are not feeling safe, when women are not feeling secure, that time half of the police department is busy in providing security to VVIP people. Today a question should be asked: do we want this corrupt, unaccountable system to continue when people are suffering, their personal security is in danger and they are humiliated no end?

The second question we should ask is how many Delhiwallas happily want to visit a police thana? I know for sure nobody wants to. The tragedy of the entire system is that the police which is there to provide security to the people has become a threat to the people. Nobody wants to visit a police station because when they know they have to do this, they will not be treated well. They will be asked for money, their dignity will be violated, and they will be humiliated no end. The police has become so arrogant that they are not willing to listen to the ministers and the CM, forget about the common man. When they are asked to do their duty, they are not listening to ministers.

This protest and demonstration should make people realise this and awaken the consciousness of the citizens of Delhi. This will help build Delhi into a better city, a safe city and a secure city.

NDTV.com: There are reports that the Congress is determined not to withdraw support to your minority government because if feels if AAP is given enough time in office, it will stand exposed as a party good at dharnas but not at governance. Are you worried by that?

Ashutosh: AAP government does not have to learn from the Congress on the question of governance. Congress has forgotten how to govern this country in the last four years, which is why people are angry and upset with them, we don't have to learn lessons from them.

NDTV.com: AAP wants four policemen to be suspended for refusing to make a series of arrests on the orders of Law Minister Somnath Bharti. They said they didn't have warrants.  The union government has ordered an enquiry. But you are not willing to wait for that inquiry to be completed. So if the cops should be suspended, shouldn't the Law Minister also be removed during the inquiry?

Ashutosh: As a routine, anybody who has been accused is suspended pending enquiry. Here, there are serious allegations against the police department. There are several complaints that have been made by the local residents and associations against the drug mafia and the sex racket operating in that area. When police department refused to act on those complaints, then residents contacted the local MLA who also happens to be the Law Minister. He, after receiving the complaint, approached the local PCR van, contacted the SHO, ACP of the area, and requested them to help solve this problem. Police, instead of acting on the complaint, connived with the drug mafia and the sex racketeers. So where is the question that action be taken against Somnath Bharti?

Secondly, when there is a complaint against the police, how come the police is investigating their own complaint? A fair inquiry is not possible as long as accused police officials are working in the same area. This demand is ridiculous. The officials should either be transferred or suspended for independent and fair investigation.

NDTV.com: Why can't the Law Minister apologise for the treatment meted out to Ugandan women? AAP was seen as the sort of party that would admit its mistakes. Is that no longer the case?

Ashutosh: Enquiry has already been instituted, wait for the report. We do not believe that without the suspension and transfer of the police, there is the possibility of an independent and fair enquiry.