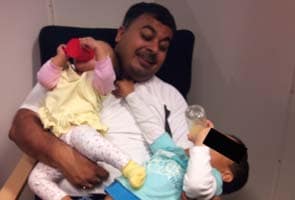 New Delhi: The Norway nightmare, which lasted almost 12 months, has finally ended for the Indian family with toddlers Abhigyan and Aishwarya returning home today morning. The children landed in Delhi a little before 10 am with their paternal uncle Arunabhas Bhattacharya, foster father and a case worker from Norway's Child Welfare Services (CWS). Here are the top 10 developments in the case so far:

1). In a major breather for the Bhattacharya family, a Norwegian court on Monday decided to hand over the custody of two children to their uncle. "I am very relieved today," Anurup Bhattacharya, the father of the children, had said after the verdict was announced. The children's return home is also seen as a diplomatic win for India. External Affairs Minister SM Krishna said, "They belong to India; they are Indian nationals. I thank the government of Norway and my distinguished counterparts."

2). Arunabhas and the two children left Norway for India less than two hours after the court gave him custody. While the mother of the children, Sagarika Bhattacharya, is in India, father, Anurup, is still in Norway.

3). Abhigyan, 3, and Aishwarya, 1, were separated from their parents Anurup and Sagarika Bhattacharya by the Norwegian Child Welfare Services in May last year. Trouble began for the Bhattacharyas when the workers of the kindergarten, where three-year-old Abhigyan used to go to, noticed that the boy had been showing symptoms similar to autism. The workers reported his condition to the CWS which began observing the family closely ostensibly to offer help even inside the privacy of their homes.

4). The parents' interactions with the children were recorded on camera and were analysed. The CWS later concluded that the boy was suffering from attachment disorder which they said was the result of a disconnect between the mother and child; they also said the child had witnessed violence between the parents. The CWS workers started then interfering over how their children should be fed or where and with whom they should sleep. They asked the father to take leave from work to help build the relationship.

5). On May 11, 2011, when three CWS workers came to the Bhattacharya home, an argument broke out with the mother. One of the workers said the little girl should be taken outdoors as the atmosphere at home was too tense, but a little later the parents were told over the phone that their daughter had been in emergency foster care. On the same day, their son who was away at the kindergarten was also taken away directly to an undisclosed location. He too had been put in emergency foster care.

6). In November 2011, a family court in Stavanger declared that the children will stay in foster care till they turned 18. The CWS refused to give custody of the children to any family member.

7). Sagarika's parents then started a campaign back in India and sought the help of the Foreign Ministry which intervened and got the case reopened.

8). Anurup and Sagarika fought a long legal battle with Norwegian authorities to get their son and daughter back to the family. The CWS, which has kept the children in foster care since May last year, made a recommendation to the Stavanger district court that the children's custody should be given to the uncle and they should be allowed to return to India.

Promoted
Listen to the latest songs, only on JioSaavn.com
9). Sources say just before they left for India, a faction of the CWS reportedly wanted to get a stay on the court order.

10). Gunnar Toresen, the head of the Child Welfare Services, still insists that their initial decision to separate the children from their biological parents was correct. He, however, said they were satisfied with the uncle as the new primary caretaker of the children.