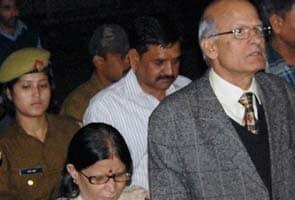 Central Bureau of Investigation (CBI) Special Judge S Lal pronounced the judgment in the Noida plot allotment scandal in which the Supreme Court had ordered an inquiry by the probe agency against Neera Yadav and Noida's then deputy CEO Rajiv Kumar.

The court also slapped a penalty of Rs one lakh each on the convicts.

Soon after the verdict, the two convicts were granted bail by the court against a surety of Rs.1 lakh each. They were also granted one month to appeal against the judgment.

Neera Yadav, who has retired now, served as the chief secretary during Samajwadi Party chief Mulayam Singh Yadav's tenure as chief minister. The CBI registered a case against Neera Yadav and others February 26, 1998. The chargesheet was filed October 16, 2002.

In 2010, a CBI special court sentenced Neera Yadav to four years' imprisonment after finding her guilty in a 2002 land allocation case pertaining to illegal allocation of commercial plots in Noida. She was given bail by the Allahabad High Court in December 2010.

Neera Yadav was named the chief secretary of Uttar Pradesh in 2005 by Mulayam Singh and the Supreme Court had intervened seeking her removal from the top post.

The Ghaziabad court's verdict comes at a time when the eight-month-old state government, led by Mulayam Singh's son Akhilesh, is facing flak from the High Court over alleged wrongdoings in Noida land allotments.

Promoted
Listen to the latest songs, only on JioSaavn.com
The High Court November 8 directed the state government to remove the CEO of Noida Authority Sanjeev Saran and chairman of the authority Rakesh Bahadur. The government filed a review petition in the case on Monday.