Asked about the buzz surrounding JD(U) chief Nitish Kumar's presence at the RJD Iftar and Tejashwi Yadav said, "Our party has been organising Iftar parties for more than two decades and we have always been inviting common people as well as senior politicians from across all parties." 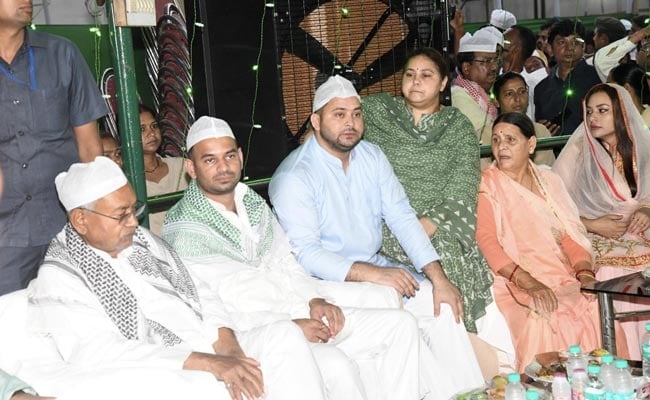 Nitish Kumar on Friday attended a 'Dawat-e-Iftar', where he was seen sitting with Tejashwi Yadav.

Amid speculation over political re-alignment in Bihar after Chief Minister Nitish Kumar attended an RJD-hosted Iftar, leader of opposition Tejashwi Yadav on Monday cautioned against imagining any "political twist" to it and asserted that his party would keep fighting forces that remain aligned with the the BJP and the RSS.

Mr Yadav said the Rashtriya Janata Dal (RJD) has never aligned with the Rashtriya Swayamsevak Sangh (RSS), the Bharatiya Janata Party (BJP) and their allies directly or indirectly, and its opinions are not formed on the "ideology of convenience".

In an interview with PTI, Mr Yadav also called for firming up of an Opposition alliance to take on the BJP in the 2024 general elections, suggesting that the Congress must focus on over 200 seats on which it is in direct fight with the saffron party, while taking a "backseat" in states where regional parties are a formidable force.

On poll strategist Prashant Kishor's parleys with the Congress for a plan to revive the grand old party, the 32-year-old RJD leader remarked that if hiring professionals or marketing agencies could make one win elections then the richest could have formed political parties and ruled the country.

He, however, added that it was up to the wisdom of the Congress on whether and how it shapes Kishor's role within its structure.

Asked about the buzz surrounding JD(U) chief Mr Kumar's presence at the RJD Iftar and if he was open to reuniting with him, Mr Yadav said, "Our party has been organising Iftar and Makar Sankranti (Dahi-Chura) parties for more than two decades and we have always been inviting common people as well as senior politicians from across all parties."

This was purely an event in sync with tradition and the only message one should draw out of this should be of peace, amity, brotherhood and harmony, he said.

"We made it very clear from the beginning that imagining any political twist undermines the sanctity of the occasion," the Leader of the Opposition in the Bihar Assembly said.

Asked about his remarks in the past that Mr Kumar was not dependable and if a change of government was on the cards, Mr Yadav said the RJD is the only regional party that has never compromised on its ideology, values and principles.

"We have never aligned with the RSS, the BJP and their allies directly or indirectly. Our opinions are not formed on the ideology of convenience and short term gains. We have fought and keep fighting authoritarian and anti-constitutional forces that remain aligned with the BJP, the RSS and the charade of the NDA," he stressed.

"Therefore, there is absolutely no question of a shift in our ideology," he said.

Is there a need for a special tutorial to understand the silence of Nitish Kumar on the demand for special status to Bihar as well as pressing for a caste census, the former Bihar deputy chief minister asked rhetorically.

Mr Kumar had on Friday attended a 'Dawat-e-Iftar' organised by former chief minister Rabri Devi at her 10, Circular Road residence in Patna. His presence there sent ripples in the political circles in Bihar as Tejashwi Yadav and his elder brother, Tej Pratap Yadav, were seen sitting beside him and having conversations.

Asked if it is high time that an alliance to take on the BJP in 2024 takes shape and whether the Congress should be its main pillar, Mr Yadav said since 2019 June, he has been saying that the Congress is in direct fight with the BJP on more than 200 seats and must focus on these to ensure that it wins at least 50 per cent of them.

"I have always opined that for a broader and united alliance at the national level, the Congress should be pragmatic and take a backseat in those states where regional parties are a formidable force and have a better chance of winning against the BJP," he said.

A widely accommodative platform with a commitment from parties that their politics shall be guided by the 'preamble' of the Constitution and nothing else, should be developed, he asserted.

Asked about the "bulldozer politics" gaining traction and the recent Jahangirpuri and Khargone demolitions, Mr Yadav said this term should not be used and glorified.

"By ruthlessly bulldozing homes and livelihoods of poor belonging to minorities, Dalits and OBCs, the BJP-RSS combine is not only bulldozing the idea of India, the Constitution but also the conscience of India," he said.

The continued "subjugation" of Muslims by the BJP governments may add a few votes to their kitty but this does no good to the present and future of India, he asserted.

On his equation with the Congress and Chirag Paswan and whether his party was the natural leader of an Opposition alliance in the state, Mr Yadav said he has a good personal equation with Gandhi family and Paswan.

"We are a party with unwavering commitment to democracy, secularism, socialism and constitutionalism. Ever since our inception, we have never joined hands with BJP-RSS. We have always walked an extra mile and sacrificed to forge alliances against the BJP-RSS," he said.

"Yes, data management teams/agencies help you to evaluate and compare figures and findings. Such exercises help you to manage the election/campaign at a micro level. However, you can't do much if you don't have motivated, committed and ideology driven cadre at booth level," he said.