No One Dares To Indulge In Stone-Pelting In Jammu And Kashmir Now: Amit Shah 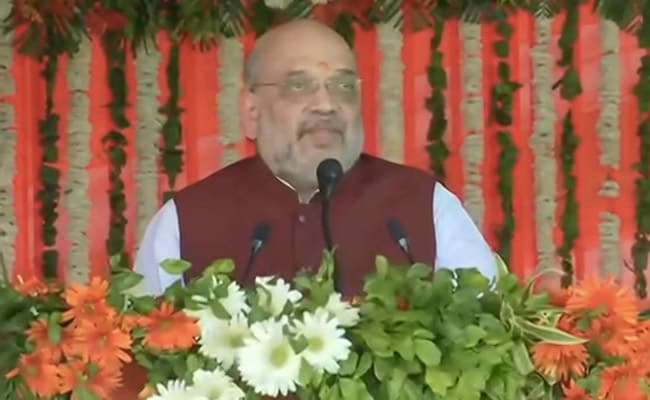 At least 42,000 people lost their lives due to terrorism in Jammu and Kashmir, Amit Shah said.

Union Home Minister Amit Shah on Tuesday said 42,000 people lost their lives to terrorism in Jammu and Kashmir over the years but security situation has improved now to such an extent that no one dares to call a hartal or indulge in stone-pelting.

A zero tolerance policy has been adopted towards terrorism, ensuring complete control of the security forces over the situation, he said, while inaugurating or laying foundation stones of development projects here.

He said, "42,000 people lost their lives due to terrorism in Jammu and Kashmir. Those who support terrorism sitting in the government were identified and action has been taken." Those who used to call 'hartal' or pelt stones on security forces were curbed totally and now no one has courage to give any such call, he said. "Do you know why there is not a single stone-pelting incident in Kashmir now. Because stone-pelters were sitting in the government at that time." He also said there has not been a single encounter now as terrorists were given an opportunity to surrender.

Mr Shah said terror incidents have come down by 56 per cent, casualties among security forces by 84 per cent. Recruitment as terror cadres has also come down, he said.

Holding J&K's three political families responsible for the "backwardness" of Jammu and Kashmir, he said the UT lagged behind on all development parameters due to their alleged misrule.

But the situation changed after 2014 as the Modi government gave priority to Jammu and Kashmir's development, and it is progressing well now, he said.

Even though Mr Shah did not identify the three families the obvious reference was to the Abdullahs (National Conference) Muftis (PDP) and the Nehru-Gandhi (Congress).

He said there has been big changes ever since Article 370 and Article 35-A were abrogated on August 5, 2019.

He said as many as 27 lakh people of Jammu and Kashmir are now getting health insurance benefits of up to Rs 5 lakh while 58 per cent people getting piped water in their homes.

Those eligible are also getting STs quota benefits, he said.

Those who wanted to indulge in corruption continue to do so for 75 years which stopped in 2019.

He also referred to the Rs 80,000 crore development projects announced by Prime Minister Narendra Modi a few years ago saying the projects are progressing well while some have already been fully implemented.

The package consists of 63 projects concerning 15 ministries and has an outlay of Rs 80,068 crore.