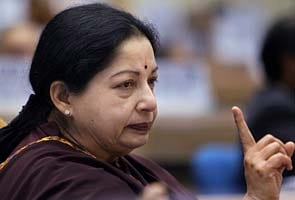 Chennai: Tamil Nadu Chief Minister J Jayalalithaa has written to the Prime Minister stating categorically that the 13 Sri Lankan cricketers in the Indian Premier League will not be allowed to play matches held in Chennai. She has said she will permit IPL matches to be held in her state only if the organisers give her an undertaking that no Sri Lankan will be involved.

She has said that with emotions in her state running high over the Sri Lanka issue, the Indian cricket board should be advised that Lankan players, umpires and other officials must not visit Tamil Nadu. "In such a hostile and tense environment, we apprehend that the participation of Sri Lankan players in the IPL tournament, with many games to be played in Chennai, will aggravate an already surcharged atmosphere and further offend the sentiments of the people," the letter says. (Read full text of letter here)

Prime Minister Manmohan Singh is out of the country. Union minister Manish Tewari said Dr Singh would read the letter and then decide.

The sixth edition of the IPL is scheduled to be held from April 3 and will be played in different locations in the country over 45 days. Ten matches are to be played in Chennai, which also has a home team in the Chennai Super Kings, with two Sri Lankan players in it. Ms Jayalalithaa has noted in her letter that all the IPL teams have Sri Lankan players on them.

IPL Chairman Rajeev Shukla told NDTV that the security of Sri Lankan players is most important. "The cooperation of the local administration is required. We have to keep the sentiments of the local people in mind as well as the security of Lankan players. We are reviewing the situation with BCCI chief N Srinivasan and will take a decision keeping both issues in mind." (Watch: Will advise players on their security, says Rajeev Shukla)

While the BCCI is yet to react officially, the Lankan cricket board has said it has informed its players and the government. "We won't tell them don't go for the IPL but we did inform them about the situation right now and it is for them to take a decision," said the chief of the Lankan board, Ajith Jayasekara.

Yesterday, Ms Jayalalithaa had written to the Prime Minister warning that India must boycott a meeting of Commonwealth countries if it is held, as scheduled, in Sri Lanka in November. All major parties in Tamil Nadu and college students across the state have been asking the Centre to take a strong stand against what they call Sri Lanka's "genocide" of its ethnic Tamils in the final months of the civil war that ended when defence forces crushed the separatist Tamil Tigers in May 2009.

Last week the DMK pulled out of the ruling UPA coalition at the Centre, accusing India of watering down a UN resolution against Sri Lanka last week that was adopted last week. India voted against Sri Lanka, but the DMK and the AIADMK said the government had let down Sri Lankan Tamils by failing to persuade the UN to use stronger language against the island nation and by not pushing for an independent rather than an internal inquiry into the alleged war crimes.

Promoted
Listen to the latest songs, only on JioSaavn.com
List of Sri Lankan players in the IPL: