"No Culprit Will Be Spared", Says PM Modi Amid Anger Over Kathua And Unnao Rape Cases

PM Modi says on Kathua and Unnao rape cases: "Our daughters will definitely get justice."

Prime Minister Narendra Modi said "As a society, we are all ashamed of it (the rape cases)"

In his first remarks on the Kathua and Unnao rape cases, which have sparked nationwide outrage, Prime Minister Narendra Modi today said no culprit will be spared. "Incidents being discussed since past two days cannot be part of a civilised society. As a country, as a society we all are ashamed of it," the prime minister said.

"I want to assure the country that no culprit will be spared, complete justice will be done. Our daughters will definitely get justice," PM Modi added while speaking in Delhi this evening.

"What do you think about the growing violence against women and children? Why are accused rapists and murderers protected by the state?" Rahul Gandhi had tweeted.

Rahul Gandhi had led a midnight march to India Gate in the heart of Delhi demanding justice for the eight-year-old girl who was kidnapped, brutally assaulted and killed in Jammu and Kashmir's Kathua in January, and for the 16-year-old girl in Uttar Pradesh's Unnao who was allegedly raped by BJP lawmaker Kuldeep Singh Sengar last year.

Mr Gandhi had said last night that the Beti Bachao (Save the girl child) slogan is good. "We are telling him (PM Modi) that he should get down to the job, implement it," the Congress president had said during the protests that are seen to be an effort to put the ruling BJP at the centre and the two states in a spot. 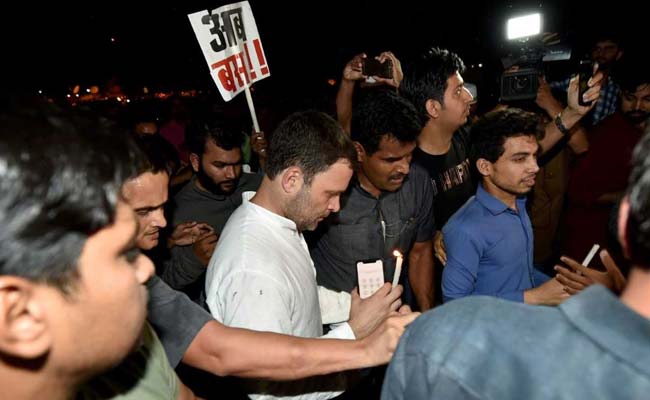 Hundreds of people, predominantly Congress workers, had joined the march, responding to Mr Gandhi's call to join him for "a silent, peaceful, candlelight vigil" to protest violence against women and demand justice.  The Congress today said it will stage protests across the country demanding justice in the two cases.

Though the Kathua rape and murder took place in January, central politicians were largely silent until details in a police chargesheet revealed the sheer cruelty and horror that the child was subjected to before she was killed.

Promoted
Listen to the latest songs, only on JioSaavn.com
Meanwhile, in Uttar Pradesh, Kuldeep Singh Sengar has paraded around all week long denying the accusation of rape, disparaging the girl and her family and hitting out at the media in the Unnao rape case. During that time, his brother Atul Singh was arrested for a brutal assault on the girl's father, who was not just arrested with severe wounds on his body but who died on Monday in custody.

Kuldeep Sengar was taken in for questioning by the CBI early this morning. The Allahabad High Court today severely reprimanded the Yogi Adityanath government, and said the approach of the government law officer that the lawmaker could not be arrested at this stage "not only exudes an unpleasant flavour" but raises doubts about the bona fides of top police officers.