Countries Should Respect Sovereignty Of Other Nations: Lok Sabha Speaker

Lok Sabha Speaker Om Birla asserted that no country should raise in its parliament issues related to the internal affairs of other countries, in light of some British MPs raising the issue of the farmers' protest. 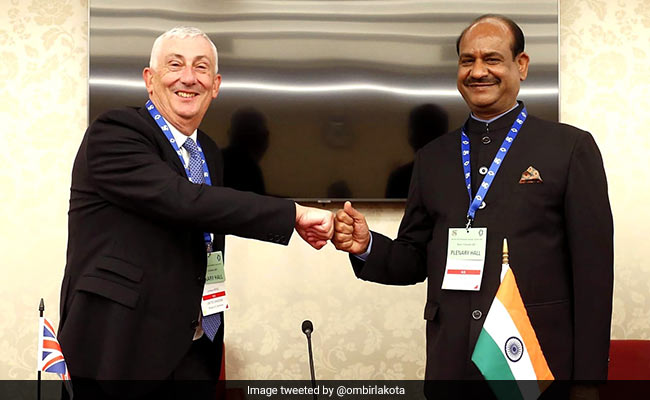 Lok Sabha Speaker Om Birla on Thursday asserted that no country should raise in its parliament issues related to the internal affairs of other countries.

Mr Birla, who is leading an Indian parliamentary delegation to G20 Parliamentary Speakers' Summit in Rome, held a bilateral meeting Thursday with Lindsay Hoyle, the speaker of the United Kingdom House of Commons.

According to a Lok Sabha Secretariat statement, Mr Birla said on the occasion that every country has its own sovereignty which other countries should respect.

No country should raise the internal affairs of other countries in its Parliament unless those matters affect the interests of that country, it said, quoting Mr Birla.

Both leaders agreed that the members of their Parliaments must exchange views through parliamentary diplomacy and try to find out how democratic institutions can be strengthened in the interest of people.

Speaker Mr Birla's remarks came against the backdrop of some British members of parliament raising the issue of the farmers' protest against the three farm laws enacted last year.

Earlier in the day, Mr Birla made an intervention at the first working session on "Response to the Social and Employment Crisis caused by the Pandemic."

Speaking on the occasion, Mr Birla underlined that in order to deal with future global disasters there is a need to treat the whole world as one family and formulate an integrated and coordinated strategy to deal with global issues.

He said parliaments need to work together towards this goal.

The Lok Sabha Speaker emphasised that the priority should be to formulate developmental policies that ensure welfare of all sections of society.

He said such development policies need to be extensively deliberated upon and discussed on multilateral platforms with the objective of preparing a suitable and sustainable global roadmap founded on the principles of social and economic justice.