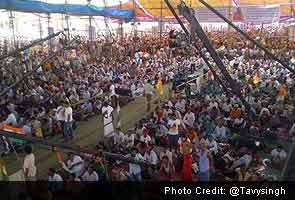 Allahabad: In what may come as a rude shock to political parties as they get into election mode, the Lucknow Bench of the Allahabad High Court today stayed caste-based rallies "with immediate effect" throughout Uttar Pradesh.

The court issued notices to the Central and state governments, the Election Commission of India and four major political parties, including the Bahujan Samaj Party (BSP), Congress, Bharatiya Janata Party (BJP) and Samajwadi Party (SP) asking them to file affidavits on why such a ban should not be placed.

"We stay caste-based rallies throughout the state of Uttar Pradesh," the Lucknow bench of the court comprising justices Uma Nath Singh and Mahendra Dayal said on a Public Interest Litigation (PIL) filed by a local lawyer Motilal Yadav.

The ruling comes days after Mayawati's BSP organised the Brahmin Bhaichara Sammelan in 40 districts of the state, including the one addressed by party supremo Mayawati in Lucknow.

Filing the PIL, Mr Yadav said there was a spurt of caste-based political rallies in the state. He submitted that while such events were causing damage to social unity and harmony, they were also vitiating the society which was against the spirit of the Constitution.

Promoted
Listen to the latest songs, only on JioSaavn.com
On behalf of the Uttar Pradesh government, additional advocate general Bulbul Godiyal appeared before the court.

The next general elections are only months away with Uttar Pradesh having the highest number of Lok Sabha seats (80) in the country.