Muzaffarpur rapes: Nitish Kumar has been targeted by opposition, mainly RJD leader Tejashwi Yadav, who has accused him of trying to shield the accused

Under opposition attack on a government-run shelter home in Bihar where over 30 girls were raped and tortured, Nitish Kumar today broke his silence and described the case as "shameful", promising strict, uncompromising action.

"What has happened has shamed us. It is a sin. Such cases should not happen again. Those responsible for this should be taught a lesson," the Bihar Chief Minister said at the launch of a government welfare scheme for girls.

"We have always said the guilty will not be spared... (An institutional mechanism) is needed to prevent such incidents since the society is inhabited by all kinds of people and they may indulge in perverse acts at the slightest opportunity," he said.

Nitish Kumar has been repeatedly targeted by the opposition, mainly RJD leader Tejashwi Yadav, who has accused him of trying to shield the accused because of their links with the ruling Janata Dal United.

At the home in Muzaffarpur, girls - one as young as seven - were drugged, raped, forced to sleep naked and scalded with boiling water by its politically connected owner and its staff, a police charge-sheet has revealed. Ten people, including owner Brajesh Thakur, have been charged in the document that detailed a network of police, politicians, administration and criminals exploiting and torturing the girls. 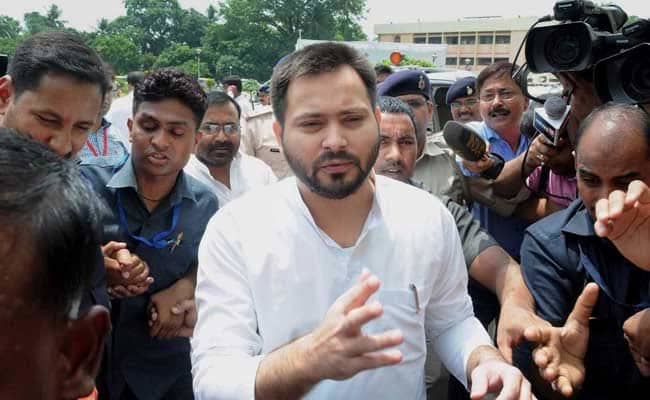 Tejashwi Yadav said he will stage a dharna on Saturday (File)

Brajesh Thakur, seen grinning to the cameras while being arrested, runs several non-profits.

There are also allegations that Bihar's Social Welfare Minister Manju Verma's husband visited the shelter home. The wife of an official arrested in the case has claimed that the minister's husband was a frequent visitor.

The minister was present at the event. She was seen in visuals rushing to her car when surrounded by reporters.

Tejashwi Yadav seized the allegations to hit out at the Chief Minister. "Against heinous institutional mass rape in Muzaffarpur... sponsored and protected by Nitish Kumar government, we will stage a dharna on Saturday," tweeted Yadav Junior, who has taken over his party's RJD leadership in the absence of jailed father Lalu Yadav.

A team of Bihar's top body to protect child rights had sent a scathing report about conditions in the home last year but the district administration and social welfare department allegedly sat on the report.