"Nitish Kumar Plotted To Kill Me": Upendra Kushwaha After Lathi-Charge 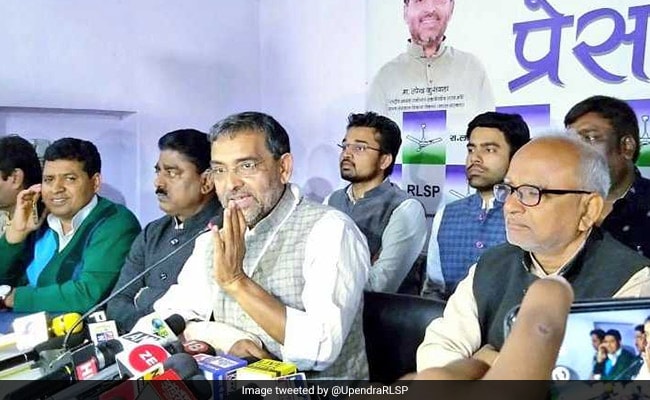 Rashtriya Lok Samata Party chief Upendra Kushwaha on Wednesday accused Bihar Chief Minister Nitish Kumar of hatching a conspiracy to harm him during a protest march last week, where he and other leaders were lathi-charged by the police. The RLSP leader was injured in the police action.

"Nitish Kumar plotted to kill me. I was attacked during the Raj Bhawan march. I demand that the incident should be probed by a judge (of the Patna High Court) immediately," Mr Kushwaha told reporters in Patna, his right arm wrapped in plaster.

He alleged a First Information Report (FIR) was filed against him and 250 others by the chief minister.

"I am giving a warning to Nitish Kumar. If he does not withdraw his complaint, then by February 9, all of us and 250 unknown people will turn up at Kotwali police station," said the RLSP chief, who on February 2 along with his supporters had marched towards the Raj Bhawan in Patna in protest against stagnant educational reforms in Bihar.

They were lathi-charged and several of them were injured.

He denied that his supporters had turned violent, and alleged that miscreants in civil dress were sent by the administration to spread chaos.

"The chief minister has been misleading the people with the claim that our march had turned violent. The fact is, goons in civil dress were sent by you (Nitish Kumar), your administration, for creating a ruckus so that the police could have a justification for using brute force," Mr Kushwaha told reporters, according to news agency PTI.

Mr Kushwaha quit the Bihar government and exited the BJP-led National Democratic Alliance (NDA) in December last year in a move anticipated for months because of his growing resentment with the ruling party and its seat-share deal with Nitish Kumar's party, JDU, for the Lok Sabha elections.

"I stand dejected and betrayed by your leadership," Mr Kushwaha had said in an acrid letter to Prime Minister Narendra Modi.