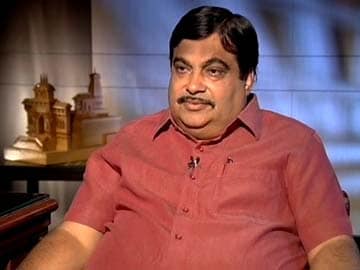 New Delhi: Former BJP President Nitin Gadkari today slapped a legal notice on Delhi Chief Minister Arvind Kejriwal for making allegations against him and including him in his list of "India's most corrupt".

The notice served through Gadkari's lawyer has asked Kejriwal to withdraw his statements within three days, failing which legal action will be taken against him.

"You (Kejriwal) are hereby called upon to withdraw your defamatory and malicious remarks by publishing and publicly apologising before all the news channels and withdrawing the name of my client (Gadkari) from the contents of news 'List of India's Most Corrupt' within three days of receipt of this legal notice, failing which my client will be constrained to take appropriate legal action against you including prosecuting you for criminal defamation at your risk, cost and consequences," the notice said.

Kejriwal had earlier during the day called Gadkari as "corrupt" and included his name in the list of "Most Corrupt" and said his party would field candidates against him.

The notice states that Kejriwal has made false, malicious and baseless allegations which are aimed at destroying the image of Gadkari in public and thus amount to be being "defamatory and scandalous".

"As a responsible Chief Minister, it is your duty to ensure that reckless and scandalous publications are not made which malign the image of a senior leader. It is evident from the tenor of the news aired and article published at your behest, that the name of my client has been deliberately highlighted even though my client has no nexus with any such incidents as alleged," Gadkari's lawyer Balendu Shekhar said in the notice.

The lawyer said the contents of Kejriwal's statements carry massive ramifications for BJP and the reputation and image of senior leaders is vital for any political party.

He alleged that on October 17, 2012 Kejriwal had also made such "false and baseless" allegations on corruption against Gadkari without any basis or proof and the same have not been substantiated till date.

"The conduct and behaviour clearly reflects that you (Kejriwal) are in the habit of maligning the reputation of my client (Gadkari) to advance your vested political agenda and gain cheap publicity and media attention," the legal notice states.

Promoted
Listen to the latest songs, only on JioSaavn.com
The BJP has also hit out at Kejriwal and threatened of legal action against him in case he fails to apologise and withdraw his remarks.

Sent By Yogi Adityanath, Dalit Family Is 1st To Get Ram Temple "Prasad"