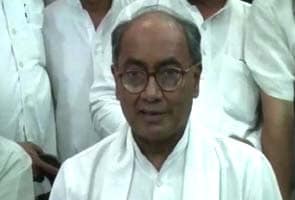 First, he taunted BJP chief Nitin Gadkari, saying that he should be the star in a sequel to the Oscar-winning film Slumdog Millionaire. Many of Mr Gadkari's companies and directors, which he is accused of using as a front to shield illegal funds and launder money, were found to be faked to addresses in Mumbai slums.

Then, he took a shot at Gujarat Chief Minister Narendra Modi, who set off a barrage of criticism for calling Minister of State Shashi Tharoor's wife Sunanda a "fifty-crore rupee girlfriend". (Read)

"Narendra Modi needs to clarify whether he is still married to Yashodaben or is he divorced," Mr Singh said. Mr Modi, leading the charge for the Gujarat elections in December, is believed to have a wife in the town of Mehsana, but he has not acknowledged this in public.

Mr Singh is already facing a defamation suit filed by Mr Gadkari. The Congressman had accused Mr Gadkari of having links with businessman Ajay Sancheti, who is alleged to have made crores in the coal block allocations scam.

There are allegations that Mr Gadkari's his business empire is founded in financial malpractices ranging from funding by shell companies to money laundering - charges now being investigated by income tax officials. Sources involved with the exercise say 13 people linked to these firms were questioned; some directors appear to be "men of no means" furthering the suspicion of ghost investors.

Earlier this month, NDTV reported on the dubious credentials of investor firms that bought into the company Mr Gadkari co-founded in 2000, Purthi Power and Sugar. The government is verifying the source of funds for this intricate matrix of investors, many of who appear to share bogus addresses and directors. Some of Mr Gadkari's own employees, like a part-time driver and an accountant, were passed off as directors in some of the shell companies, NDTV found.