Due to heavy rains and landslips, several of the district's arterial roads have been battered, disconnecting many villages and towns. 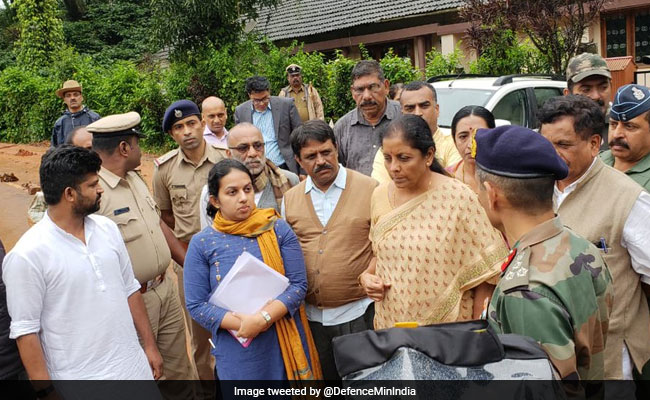 Nirmala Sitharaman reviews the situation with district officials and locals in Kodagu.

"I can assure you that the task force of the Indian Army's Border Roads Organisation (BRO) will visit as consultants and advise the administration on how to build roads in hilly areas," Ms Sitharaman told reporters in Madikeri, about 280km from the state capital Bengaluru.

Due to heavy rains and landslips, several of the district's arterial roads have been battered, disconnecting many villages and towns.

The Defence Minister visited Kushalnagar and Madapura in the district, which were severely affected by heavy rains and flash floods last week.

She also interacted with few flood-affected people sheltered at a relief camp at Madikeri in the district.

The Minister, who is an MP from Karnataka, said the Centre's financial aid to the region in distress will be decided after an assessment of the loss.

According to preliminary estimates, the district has suffered losses worth Rs 1,140 crore to public and private property as a result of the rains, said Kodagu Deputy Commissioner P. Sreevidya.

"At least 34 village panchayats have been badly affected and the municipalities in Kushalnagar and Madapura suffered heavy losses as they are in the catchment area of Harangi river," she said.

The district administration is also working on providing temporary shelters to those affected by floods and residing in relief camps.

"We have identified land and an additional deputy commissioner rank officer will oversee the rehabilitation," Sreevidya added.

About 75 Army engineering task force personnel will also be assisting the district officials in restoring the critical roads of the district, the state's Relief Commissioner Gangaram Baderiya said in a statement earlier.

About 5,000 people are currently sheltered in 51 relief camps across the district, with more than 1,100 houses have been destroyed in floods and landslips.