New Year Day: It was a visual delight as priests conducted the beautiful Ganga aarti welcoming January 1. Many people were seen at the ghats of Varanasi to watch the first sunrise of 2021. 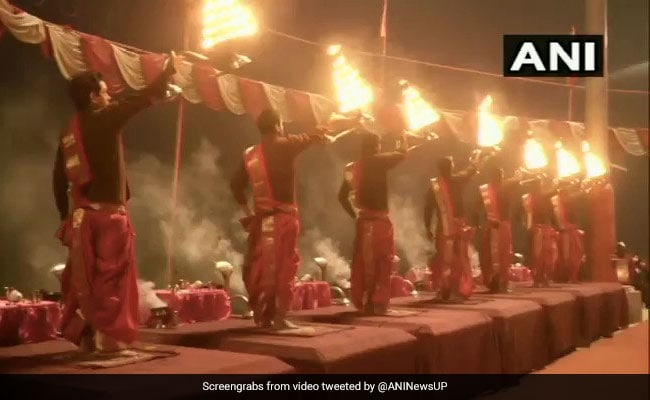 New Year Day: January 1 was welcomed at Varanasi's Assi Ghat with beautiful Ganga aarti on the last day of the year gone by. Ganga aarti, a daily affair, a tradition that has been going on for years. It was a visual treat as several pujaris or priests in charge of the daily puja at the temples stood in a row and performed aarti, with huge deepams, dedicated to Ganga Mata or Ganga Ji as referred to the holy river by people. Many tourists - both local and from other parts of India - were seen at the ghats of Varanasi watching the first sunrise of 2021 this morning.

#WATCH | Ganga Aarti being performed at the Assi ghat in Varanasi, on the first day of the year 2021 pic.twitter.com/4KtnmFoIyQ

Tourists from other countries were not there this year as there are travel restrictions in place in view of the Covid-19 pandemic situation and the new UK strain of the virus, which is said to be more infectious.

Ganga aarti, or the ritual of offering prayers to the Ganges river, is held every day. The aarti is done in a rhythmic manner and bhajans are sung by Hindu devotees. The Ganga aarti lasts for about 45 minutes. and hundreds of people gather at the ghats to watch the event.

Aarti welcoming January 1 was held at other temples in India as well. Devotees took part in aarti at Lakshmi Narasimha Swamy Temple in Bengaluru's Malleshwaram on the New Year Day.

On January 1, many devotees visited Adyapith Kali Temple in Kolkata to offer prayers. "I try to come for darshan at least once a year," a devotee said.

"I try to come for darshan at least once a year. I wish that we get the COVID19 vaccine soon this year," a devotee says. pic.twitter.com/yD9FKafHtc

Many people in Patna visited the Mahaveer Temple to offer prayers on New Year Day.

Bihar: Patna's Mahaveer temple sees a large number of devotees on the first day of the year 2021 pic.twitter.com/rEtdYQtE2j

Wish you a blessed and prosperous New Year 2021!