India's Lovlina Borgohain may have lost in the boxing semi-final in the Tokyo Olympics, but she will return home to Assam with a bronze - the first Olympics medal won by a sportsperson from this state in the northeast. And in her success her village sees glory - the village is getting a new road for a start. As more and more people hear her story of determination, many see it as a big inspiration for those in rural and remote areas.

There is an air of celebration like in the spring festival of Bihu in the village of Ms Borgohain, 23, in Golaghat district's Barpathar, some 320 km from Guwahati. People danced on the streets and the sound of drumbeats and firecrackers reverberated in the village.

"You can see for yourself how remote and underdeveloped this place is and for a girl from here to reach the Olympics and win a medal is amazing," a villager told NDTV.

"Lovlina is an emotion, an inspiration," another man said.

Minutes before @LovlinaBorgohai gets in the ring ; her village - Baromukhia is already in Bihu mode - the very Assamese way to say - Go for glory ! @ndtv reports from ground zero. pic.twitter.com/CsLFKePlzZ

This was the first time Ms Borgohain qualified for the Olympics.

The residents of Baromukhia village with the help of an MLA are repairing a dirt road leading to the Olympian's home to make it accessible by vehicles. The village only had muddy paths that got flooded during rain.

"Lovlina's medal has brought attention to this remote area. Now everyone in Assam will want to do something here," a villager, Sanjib Kumar Baruah, told NDTV.

Ms Borgohain's first coach, Prasanta Das, who taught her Muay Thai and kickboxing when she was 12, remembers her as a talented child when they practiced at the grounds of a small school.

"She won her first boxing medal without any formal boxing training, with only knowledge of martial arts," Mr Das said. 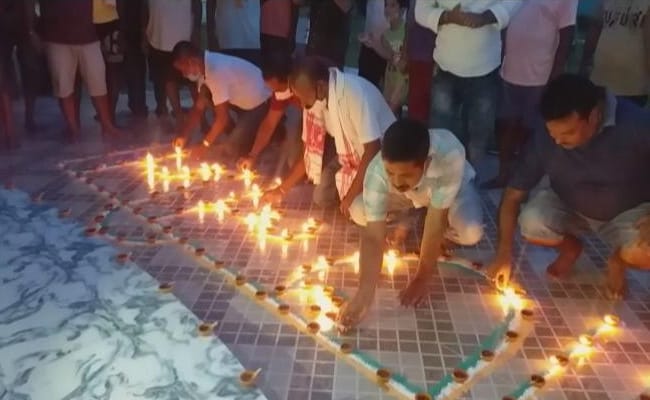 There is an air of celebration in Lovlina Borgohain's village

At Ms Borgohain's home, her twin elder sisters are away as they serve with the central forces. Her father, who works in a small tea estate, also takes care of her mother, who had a kidney transplant. The family has seen big struggles. Ms Borgohain had spent her Arjuna Award money for her mother's kidney treatment.

"Her mother got her and the two twin elder sisters to learn martial arts for self-defence," the boxer's father, Tiken Borgohain, told NDTV.