Prasar Bharati was established through an act which safeguards its autonomy, he said after launching state-of-the-art high-definition DSNG vans at Doordarshan Bhawan in Delhi. 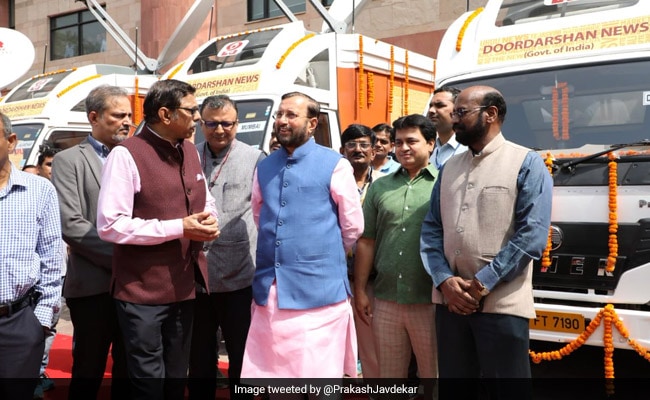 The new government at the centre will retain the autonomy of Prasar Bharati, Information and Broadcasting Minister Prakash Javadekar said on Monday.

It was established through an act which safeguards its autonomy, he said after launching state-of-the-art high-definition DSNG vans at Doordarshan Bhawan in Delhi.

"Autonomy of the Prasar Bharati is important. We will retain it... We want Prasar Bharati to work smoothly and bring new programmes and find new dimensions," Mr Javadekar said.

The minister lauded public broadcasters DD and All India Radio (AIR) for their credible programmes and coverage and asked officials to promote channels like DD Bharati.

He said the new vans will help DD in collection of high quality visuals from the outdoor spots.

DD News has acquired 17 high definition DSNG vans which are capable of transmitting signal in HD and multi camera production.

Information and Broadcasting Secretary Amit Khare said a three-year plan has been approved by the government to develop the infrastructure of Prasar Bharati at an expenditure of Rs 1,054 crore.

"There are many channels in the country which claim to be the fastest but DD and AIR command the highest credibility," he said.

The DD and AIR have the highest numbers of viewers and listeners in the country, he added.