Network of more than 100 airports to connect small towns and cities: PM 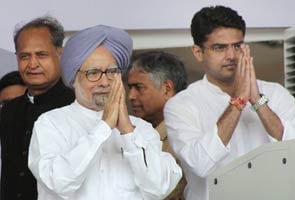 Kishangarh: Small destinations in the country will have air connectivity with a network of more than 100 airports planned to meet the expected passenger load capacity of 30 crore by 2020, Prime Minister Manmohan Singh today said.

The first such airport will come up in Kishangarh town in Rajasthan's Ajmer district, he said after laying the foundation stone for the development of the airport which is scheduled to be operational by 2016.

"An ambitious scheme to develop a network of 100 smaller airports in the country is being implemented. Focus earlier was on developing airports in metro cities and now more than 100 airports will be set up in small towns and cities," Dr Singh said.

"This will enhance air connectivity in the country. Kishangarh airport will be the first project under this scheme," he said, adding that it will also meet requirement of increasing passenger load which is expected to be around 30 crores by 2020.

The prime minister said the Kishangarh airport, to be set up at an estimated cost of 161 crore in first phase, will accelerate economic activities and growth in the area.

"Ajmer is a noted tourist destination having famous dargah of Sufi saint Khwaja Moinuddin Chisti and Brahma temple in Pushkar town. Besides, the region is known for industries including that of marble and the new airport project will push economic growth," he said.

Dr Singh said that passenger load has increased significantly and the trend would continue.

"The number of air passengers was 16 crore last year and it is estimated to be increased by 30 crore by the end of 2020. We will have to put more efforts to meet the requirement and both the government and private sectors need to make heavy investment for this," he said.

Speaking on the occasion, Civil Aviation Minister Ajit Singh highlighted the importance of air connectivity in smaller destinations and said that his ministry was now working in this direction.

"There are small airports in several cities but lack services. We now plan to start services at such airports in order to enhance connectivity," the Minister said.

Kishangarh town, famous for marble industry, is located on NH-8 near Ajmer city.

The civil airport, to be set by AAI, in the town will have 2000-meter long runway and a capacity to handle 150 passengers.

Terminal building has been planned on modular concept with modern facilities. There will be 6 check-in counters, one security check unit and parking capacity for 125 cars.

Promoted
Listen to the latest songs, only on JioSaavn.com
Chief Minister Ashok Gehlot, Union Minister of State for Corporate affairs Sachin Pilot were among others present on the occasion.