"An average of 5 per cent of production is given as incentive. This means that PLI schemes will lead to production worth USD 520 billion in India in the next five years," PM Modi said. 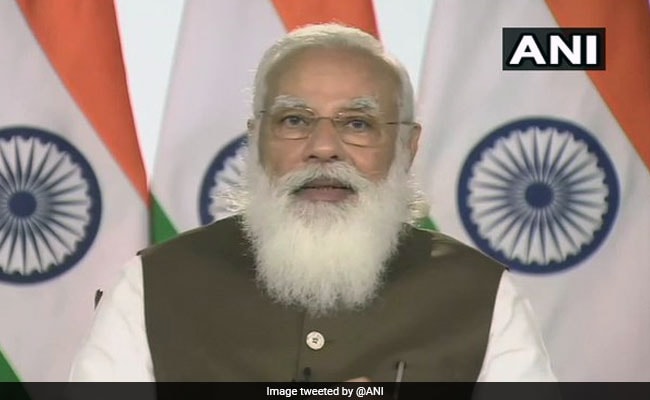 "Our effort is to reduce over 6,000 compliance burden (for industry)," PM Modi

Prime Minister Narendra Modi on Friday said production linked incentive (PLI) scheme, which is aimed at boosting domestic manufacturing and exports, is expected to increase the country's production by USD 520 billion in the next five years.

Addressing a webinar on PLI scheme, organised by Department of Industry and International Trade (DPIIT) and NITI Aayog, through video conference, PM Modi said the government is continuously carrying out reforms to boost domestic manufacturing.

In this year's Budget, about Rs 2 lakh crore was earmarked for the PLI scheme for the next five years and "there is an expectation that the scheme would result in increasing the production by about USD 520 billion in the next five years", he said.

He added that there is also an expectation that the current workforce in the sectors, which will avail the benefits of the PLI scheme, will be doubled and job creation will also increase.

The Prime Minister said the government is working to reduce compliance burden, further improve ease of doing business and cut down logistics costs for the industry.

"An average of 5 per cent of production is given as incentive. This means that PLI schemes will lead to production worth USD 520 billion in India in the next five years," he said.

PM Modi said that over the past 6-7 years, several successful efforts have been made to encourage "Make in India" at different levels.

He stressed on the need to take a big leap, as well as increase the speed and scale to boost manufacturing as it would increase employment generation in the country.

The Prime Minister said the government is working at every level to promote the industry through measures like ease of doing business, reducing the compliance burden, creating multi-modal infrastructure to reduce logistics costs, and constructing district-level export hubs.

"Our effort is to reduce over 6,000 compliance burden (for industry)," he said.

The government, he said, believes that its interference in everything creates more problems than solutions and "therefore, self-regulation, self-attesting, self-certification are being emphasised".

"We have to attract cutting-edge technology and maximum investment in the sectors related to our core competency," he added.

Underlining the difference between the earlier schemes and those of the current government, the Prime Minister said that earlier industrial incentives used to be open ended input-based subsidies, now they have been made targeted and performance based through a competitive process.

About PLI benefits, he said 13 sectors have been brought under the ambit of the scheme and it would benefit the entire ecosystem associated with these sectors.

"With PLI in auto and pharma, there will be very less foreign dependence related to auto parts, medical equipment and raw materials of medicines. The energy sector will be modernised in the country with the help of advanced cell batteries, solar PV modules and specialty steel," he said adding the PLI for the textile and food processing sector will benefit the entire agriculture sector.

PM Modi added that recently approved PLI scheme in IT hardware and telecom equipment manufacturing will lead to tremendous increase in production and domestic value addition.

"IT hardware is estimated to achieve Rs 3 lakh crore worth production in four years and domestic value addition is expected to rise from current 5-10 per cent to 20-25 per cent in 5 years," he said adding similarly telecom equipment manufacturing will witness an increase of about Rs 2.5 lakh crore in five years.

"We should be in a position to export worth Rs 2 lakh crore from this," the Prime Minister said.

In the pharma sector, he said, there is an expectation of more than Rs 15,000 crore investment in the next 5-6 years under PLI, which will lead to Rs 3 lakh crore in pharma sale and export increase of worth Rs 2 lakh crore.

Further, he said trust has increased in Indian medicines, medical professionals and equipment across the world and to honour this trust, the pharma sector should work on chalking out a long-term strategy to take advantage of this.

Even during the pandemic, mobile phones and electronic components sector saw a fresh investment of about Rs 1,300 crore and created thousands of new jobs, he added.

The Prime Minister also stated that the United Nations has declared 2023 as the International Year of Millets and more than 70 countries came to support India's proposal and unanimously accepted it in the UN General Assembly.

"This is also a big opportunity for our farmers," he said and urged the industry to start a worldwide campaign in 2023 on the nutritional potential of millets or coarse grains to protect people from getting sick.

The demand for millets at the domestic market and abroad will increase rapidly with this announcement and this will greatly benefit Indian farmers.

He also urged the agriculture and food processing sector to take full advantage of this opportunity.