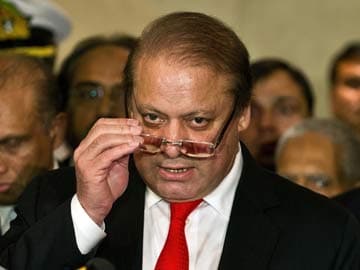 Pakistan Prime Minister Nawaz Sharif reads a statement to the media prior to his departure, at Taj Man Singh hotel in New Delhi on May 27, 2014.

New Delhi: Pakistan Premier Nawaz Sharif today pitched for "working together" in his maiden meeting with newly-elected Prime Minister Narendra Modi and said both will have to strive to change confrontation into cooperation.

Mr Sharif, who attended Mr Modi's swearing-in ceremony yesterday, described his meeting as "good and constructive" and said they have agreed that their Foreign Secretaries would be meeting soon to review and carry forward the bilateral agenda in the spirit of today's meeting.

Before his departure for Pakistan, Mr Sharif met the press and read out a statement which said that his government stands ready to discuss all issues between the two countries, in a spirit of cooperation and sincerity.

"We agreed that our meeting in New Delhi should be a historic opportunity for both our countries. I pointed out that we were at the beginning of our respective tenures, with a clear mandate. This provides us the opportunity of meeting the hopes and aspirations of our peoples that we will succeed in turning a new page in our relations. The one and a half billion people of the two countries want us to focus on their well-being and welfare," he said.

During his 50-minute-long meeting, Mr Sharif said he also recalled his invitation to then Prime Minister Atal Bihari Vajpayee to Lahore in February 1999 and that he "intended to pick up the threads of the Lahore Declaration, from where it had to be left off in October 1999".

"I stressed to Prime Minister Modi that we have a common agenda of development and economic revival, which is not possible to achieve without peace and stability in the region.

I urged that together, we should rid the region of instability and insecurity, which has plagued us for decades.

"Consequently, it was important for us to work together for peace, progress and prosperity. Finally, I urged that we had to strive to change confrontation into cooperation.

Engaging in accusations and counter-accusations would be counter-productive, I emphasised....After all, we owe it to our people to overcome the legacy of mistrust and misgivings," the Pakistan Prime Minister said.

He said they agreed that this common objective could be facilitated by greater people-to-people exchanges, at all levels.

"Prime Minister Modi warmly reciprocated my sentiments and remarked that my visit to New Delhi was seen as a special gesture by the people of India. He stated that it was incumbent on both of us to work together, to achieve our common objectives for peace and development.

Promoted
Listen to the latest songs, only on JioSaavn.com
"I take leave of this historic city. I do so with a strong sense that the leaderships and the peoples of our two countries share desire and mutual commitment to carry forward our relationship, for the larger good of our peoples," Mr Sharif added.