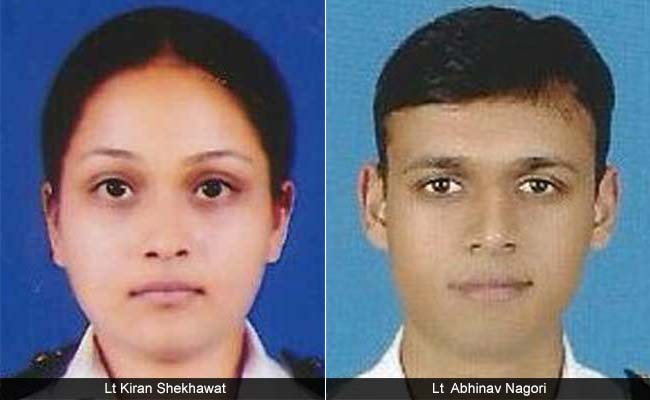 Lt. Kiran Shekhawat and Lt. Abhinav Nagori, who died in the Dornier aircraft crash off the Goa coast.

The bodies of two naval officers missing since Tuesday night when a Dornier aircraft crashed off the Goa coast have been recovered. Three people were on the plane when it went down. Commander Nikhil Kuldip Joshi, who was the pilot of the aircraft, was rescued by fishermen and is in hospital.

Last night, the body of Lt. Kiran Shekhawat, 27, was found in the fuselage of the crashed aircraft. She is the first woman officer in India to die in the line of duty. Lieutenant Shikhawat joined the Navy in 2010.

She was training to be an Observer - an officer in charge of all sensors on board a surveillance and reconnaissance aircraft. Lt. Shekhawat, who was married to a navy officer, was part of the contingent of women in the navy who marched in the Republic Day parade this year.

This morning, the body of Lieutenant Abhinav Nagori, was also recovered and taken to Goa. 24 year-old Lieutenant Nagori had joined the Navy in July 2012 and was training to be a pilot.

Promoted
Listen to the latest songs, only on JioSaavn.com
12 ships with naval divers and four aircraft were used to search for the wreckage of the plane which crashed during a routine sortie.

The Navy uses around 32 Dornier aircraft for reconnaissance, and search and rescued operations. This is the first Dornier of the Indian Navy to crash since it was inducted into the Navy in the early 90s. The Ill- fated Dornier was carrying out a search and rescue exercise at night when it crashed.