The INS Betwa tipped on to its left yesterday at the Naval dry dock in Mumbai.

Mumbai: A day after two Indian Navy sailors were killed after the 3850 tonne guided missile frigate INS Betwa collapsed on its side inside a Naval dry dock in Mumbai, new details are emerging on the extent of the damage.

NDTV has learned that 25 per cent of the frigate, which was built and commissioned at a cost of Rs 600 crores, is flooded. This includes sea-water ingress into its engine room. At the time of the accident, only 10 per cent of the weaponry that is installed on the warship was actually onboard.

Despite the massive damage to the INS Betwa which was commissioned in 2006, the Navy is confident that the ship will be set upright though the process of repairing and making her battle-ready could take up to two years.

The mast of the ship which contains crucial sensors was shorn off the vessel yesterday and major damage is expected on its surface which is resting on its side. In a statement, the spokesperson of the Indian Navy, Captain DK Sharma has said, "Salvers have come in, some from abroad to salvage the ship."

It's unclear though how salvage experts intend to raise the ship which weighs 1,500 tonnes, more than the INS Sindhurakshak, the submarine that sank at its mooring at the Naval dockyards in Mumbai on August 2013. It had taken more than 8 months to raise the Sindhurakshak.

Images of the INS Betwa at the Naval dockyards indicate the presence of another warship next to it, INS Pralay, at the Navy's narrow Cruiser Graving Dock in Mumbai.

Sources have told NDTV that it may not be possible to remove the missile corvette Pralay from its location until the INS Betwa is set afloat and removed.

Navy officers have told NDTV that the dry dock where the INS Betwa was being refitted was being flooded to enable the warship to float out of the dock. 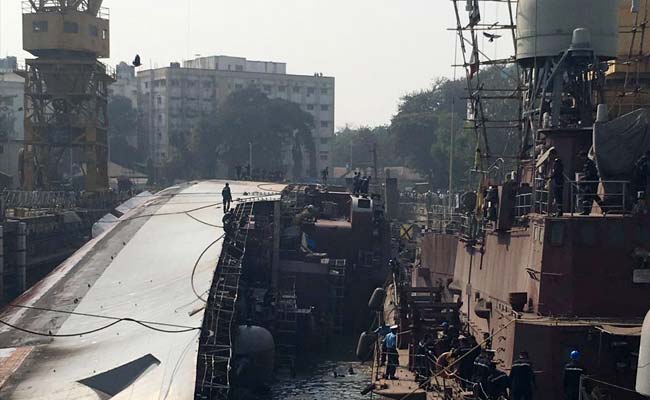 25% of the frigate, built and commissioned at a cost of Rs 600 crores, is flooded

This is a delicate and time consuming process where the crew of the warship and the Dock Master who is a senior Navy officer need to ensure that the centre of gravity and centre of buoyancy of the warship, key to its stability in the water, are both maintained to ensure there is no incident.

In this case, there appear to have been grave mistakes committed in the process of floating the warship which resulted in the frigate crashing to its side.

As the Navy aims to find a solution to the crisis involving INS Betwa, NDTV has learned that a big priority is also to clear the dock to enable other ships to be refitted. At the moment, there are three other operational dry docks at the Naval dockyard in Mumbai though they are considerably smaller than the Cruiser Graving Dock.  A new, large dock on the Outer Tidal Basin of the Navy facility has still not been commissioned.

The INS Betwa is the third Indian Navy vessel to have met with an accident while docked.

Promoted
Listen to the latest songs, only on JioSaavn.com
In January, 2011, the frigate INS Vindhyagiri sank at her berth after a major collision. She was raised only to be sailed out and used as target practice.

In August 2013, the submarine INS Sindhurakshak had a series of explosions onboard in which 18 sailors were killed.