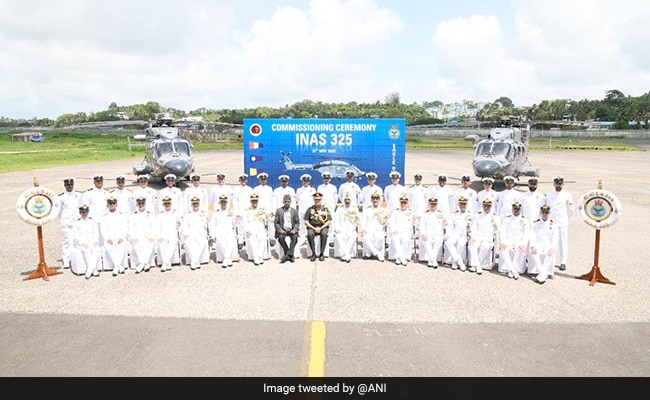 The newly inducted aircraft flew for the first time over the Andaman Islands earlier this year.

The newly inducted aircraft flew for the first time over the Andaman Islands earlier this year and was officially inducted on January 28 this year.

Addressing the gathering, Lieutenant General Ajai Singh congratulated the INS Utkrosh on this momentous occasion. He emphasized the role of the Indian Armed forces during the recent national crisis and highlighted the yeoman service that the Advanced Light Helicopter (ALH) has rendered in recent years.

The state-of-the-art multi-role helicopter has been developed and manufactured by Hindustan Aeronautical Limited (HAL), Bangalore which embodies the mission of 'Aatmanirbhar Bharat' and helps protect maritime interests in the region to boost India's strategic presence.

The squadron derives its name from the nocturnal bird of prey, the 'Eagle Owl'. The keen sense of observation and tracking of the eagle exemplifies the sensors and advanced avionics of the helicopter akin to the nocturnal prowess of the owl, personifying the night vision capabilities of the aircraft.

"These helicopters come with the latest-generation avionics and role equipment. They are primarily meant for use in long-range SAR and maritime recce role. They can also be used for humanitarian assistance and disaster relief in the islands. The helicopter has surveillance radar, EO/FLIR, homer, high-intensity searchlight and a removable Medical Intensive Care Unit for the Air Ambulance role," an official release read.

The squadron is commanded by Commander (Cdr) Avinash Kumar Sharma, who is a highly proficient and experienced pilot qualified on Chetak, UH-3H and ALH helicopters with more than 2300 hours of flying and over 17 years of distinguished service.

The commissioning of the ALH Squadron is a big step in enhancing capabilities to also support islanders and administration in remote areas of the large archipelago of Andaman and Nicobar Islands. This multi-utility aircraft will serve to majorly boost the military might of the Indian Armed Forces in this region.