The Centre is facing widespread criticism from opposition parties, and even the general public, for a steep hike in prices of essential commodities. 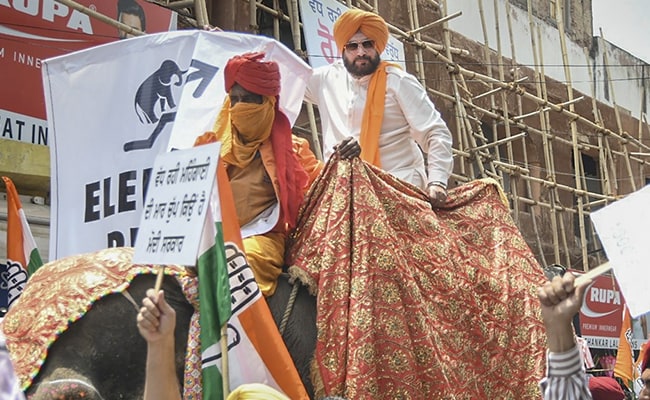 "This affects the poor, middle class, farmers...95 per cent of Punjab and all of India," he said.

Punjab Congress leader Navjot Singh Sidhu today rode an elephant in a symbolic protest against the price rise. He could be seen sitting on an elephant draped in a white banner saying "elephant rise in prices". Speaking to the media, the cricketer-turned-politician said prices are rising at a rate as big as an elephant. "Mustard oil prices have gone from Rs 75 to 190, pulses from Rs 80 to 130. People can buy chicken at this rate. Chicken and daal have become the same now. This affects the poor, middle class, farmers...95 per cent of Punjab and all of India," he said.

The Centre is facing widespread criticism from opposition parties, and even the general public, for a steep hike in prices of essential commodities -- particularly fuel, cooking gas, and cooking oil.

Mr Sidhu has been protesting against inflation and price rise across Punjab. “The situation suggests that rich people are getting richer and poor poorer. If committing atrocities is a sin, tolerating atrocities is a bigger sin. Inflation does not affect the affluent but the poor,” he had said during a protest in Amritsar last month.

The former Punjab Congress chief in 2012 did the same as part of the BJP's nationwide protest against inflation. He was part of the ruling party then.

Domestic cooking gas LPG (Liquefied Petroleum Gas) prices were increased by Rs 3.50 per cylinder on Thursday. This is the second hike in May, taking LPG price above the Rs 1,000-mark.

Non-subsidised cooking gas now costs Rs 1,003 per 14.2-kg cylinder in the national capital, according to a price notification of state fuel retailers.

The hike comes on the back of a Rs 50 per cylinder increase effected on May 7. Prior to that, prices were raised by the same amount on March 22.

The price hike in gas cylinders comes when fuel rates are above the Rs 100 per litre mark in several states.

The rates continue to rise against the backdrop of the Russia-Ukraine war and global supply concerns.