Justifying his allegation of "anti-woman" against Naveen Patnaik, Dharmendra Pradhan alleged that the BJD has fielded candidates accused in woman atrocity cases. 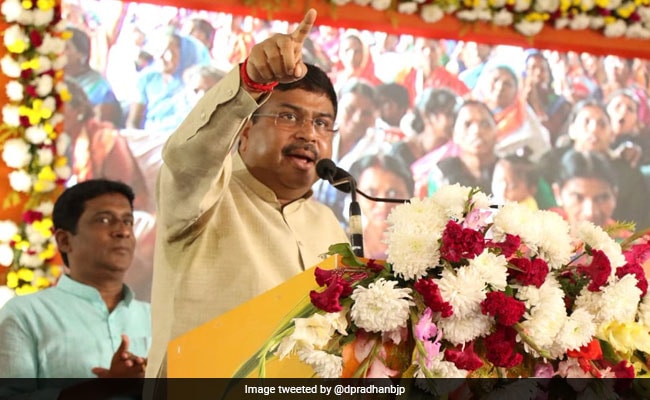 Mr Pradhan said this in a statement while reacting to Naveen Patnaik's Thursday message on women empowerment. Odisha Chief Minister had said that women empowerment is the real "double engine" for growth and development of India.

Mr Patnaik, whose regional party has fielded 33 per cent of women candidates in Lok Sabha elections from the state, had also criticised the national parties for not providing adequate representation to women in decision making bodies. He cited success of New Zealand Prime Minister Jacinda Arden and German Chancellor Angela Merkel as symbol of women empowerment.

Justifying his allegation of "anti-woman" against Mr Patnaik, the senior BJP leader alleged that the BJD has fielded candidates accused in woman atrocity cases.

Mr Pradhan said BJD has renominated sitting Pipili MLA Pradip Maharathy who resigned from the council of ministers in the face of his "anti-woman" activities and remarks. The ruling party has also fielded a similar candidate in Bhubaneswar, he claimed.

The Union Minister said a woman two days ago attempted self-immolation before the Chief Minister's residence opposing candidature of a leader who allegedly physically abused her.

"These instances show Patnaik style of women empowerment," Mr Pradhan said in the statement adding that a minor rape victim girl at Kunduli in Koraput district committed suicide as she did not get justice.

The Union Minister said women and children in Odisha's 25 districts are malnourished and 12 minor girls got pregnant while staying in state run hostels.

Referring to Mr Patnaik's statement where he named New Zealand Prime Minister Jacinda Arden and German Chancellor Angela Merkel, the Union Minister said: "Had the Chief Minister taken names of Union Ministers like Sushma Swaraj and Nirmala Sitharaman, the women of India and Odisha would have got inspiration."

Mr Pradhan claimed these two women Union ministers have emerged as symbol of women empowerment across the world.

Claiming that Chief Minister Naveen Patnaik was afraid of the growing popularity of Prime Minister Narendra Modi in Odisha, Mr Pradhan said: "You may indulge in propaganda against Modi, but the people of Odisha have this time decided to ensure a ''double engine'' government in the state."