New Delhi: A National Investigation Agency or NIA officer was shot dead in Uttar Pradesh's Bijnor on Saturday night in what the agency has described as a "planned attack." Police officials said they are probing all possibilities including terror links to the attack. The officer was travelling with his wife, who was also injured in the attack, and children in a car. His body was brought to his home in Delhi on Sunday evening.

NIA Deputy Superintendent of Police Mohammed Tanzil, 45, and his wife Farzana were shot at from close range by two unidentified gunmen on a motorcycle near Sahaspur town. The couple's children were not hurt in the attack. "The officer had asked his children to duck before the shots were fired," a senior official told NDTV. Those behind the killings appeared to have been tracking Mr Tanzil moves for some time, he added.

Asked about a possible terror link to the shooting, Daljit Chowdhry, an Additional Director General of the UP Police said, "Nothing can be ruled out. A very serious offence has taken place in the district and we have taken it very seriously. The body has been sent for postmortem and details of what actually happened will soon come out." Mr Tanzil was investigating the 2007 Wagamon SIMI arms training camp matter and cases against suspected ISIS sympathizers.

He said the state's borders had been sealed soon after the attack. "We are trying to find out the accused and the motive behind the murder. We are also trying to ascertain whether the 9 mm pistol used for the crime was country-made or factory-made. It is definitely a planned attack and not a robbery," he added.

"He (Mohammed Tanzil), along with his wife, was returning from the wedding of his niece when two unidentified people on a motorcycle stopped his car around 12.45 am and shot at him," Inspector General of Police (Law and Order) Bhagwan Swaroop had earlier said. 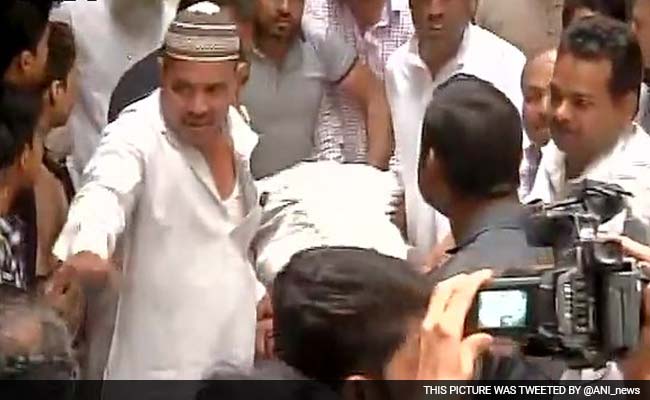 Body of NIA officer Mohammed Tanzil is brought to his residence in Delhi.
Mr Tanzil's brother, Raghib Ahmed, said the officer was shot at 21 times and his wife sustained four bullet injuries. "He had no enmity against anyone. He was a friendly, cheerful person," Mr Ahmed said.
The injured couple was rushed to a hospital in Moradabad where the officer was declared dead on arrival. His wife has been shifted to a hospital in Noida and her condition is said to be serious.

Describing Mr Tanzil as a "very brave officer" NIA Inspector General Sanjeev Kumar said in New Delhi that the attack on the officer was "planned." Mr Tanzeel was originally from the Border Security Force and had joined the NIA on deputation six years ago, soon after it was created.