Two men misbehaved with a woman, yanking her sari, during the filing of nominations for the block chairman polls in Lakhimpur Kheri, Uttar Pradesh. 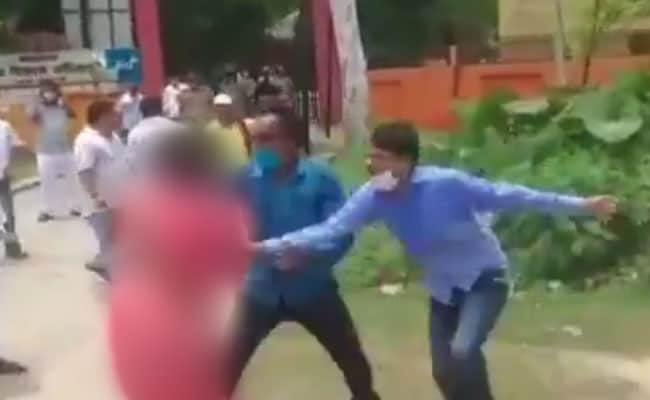 A woman, proposer of a UP party candidate, was manhandled outside a UP nomination centre. (File)

The National Commission for Women (NCW) has asked the Uttar Pradesh police to immediately take action against two men who misbehaved with a woman, yanking her sari, during the filing of nominations for the block chairman polls in Lakhimpur Kheri.

As a video of the incident involving the woman surfaced online, creating outrage, the women's body said that NCW chairperson Rekha Sharma had, in a letter issued on Thursday, sought strict action against the men. The woman seen in the video was a proposer for a party candidate in the block panchayat polls.

"National Commission for Women on July 8th had taken suo motu cognisance of an incident wherein a woman was allegedly attacked and misbehaved with and her sari was pulled in Lakhimpur Kheri district of Uttar Pradesh," the Commission said.

It took action after it was tagged in a Twitter post of a video from the incident.

Ms Sharma had written to the Director General of Police of Uttar Pradesh to immediately intervene in the matter and take strict action against the men, it said.

Voting was held on Saturday for 476 posts of block panchayat chiefs in the state, with sporadic incidents of violence.

The opposition Congress has attacked the BJP government over the violence during the polls, including the Lakhinpur Kheri incident, and demanded an apology.

Southwest Monsoon To Withdraw Completely By Around October 26: Forecast