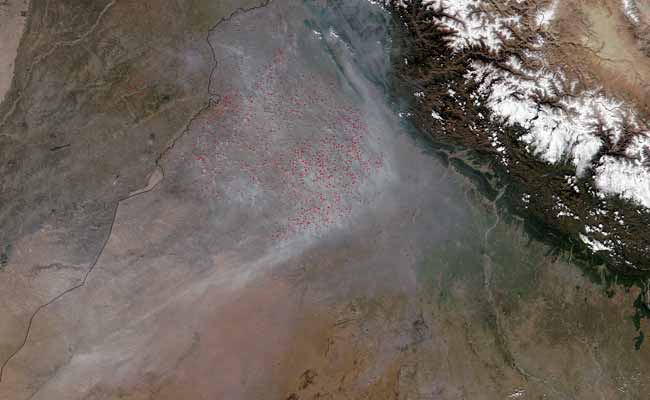 New Delhi: Thousands of fires blaze over Northwest India, covering a vast swathe in smoke and haze, a picture taken by a NASA satellite has shown, revealing a disturbing reason behind the country's deteriorating air quality.

Marked by numerous tiny red dots, the spots in the NASA picture taken on October 30 show where fires are raging mostly from the uncontrolled burning of stubble left over after the paddy crop both in Indian and Pakistani Punjab.

Swept by winds, the smoke and haze is then carried all over North India including capital Delhi which in the last year has been found to be the world's most polluted major city.

Even in Punjab's Amritsar, the revered Golden Temple is at risk of losing its sheen because of the persistent pollution that hangs in the air, a major contributor to which is the paddy stubble burning, a recent study by the Indian Institute of Technology in Delhi had said.

Burning paddy stubble has also been blamed for releasing 'black carbon', a component of fine particulate matter which rises high into the Himalayas and speeds up melting of glaciers, according to studies.

While farmers earlier were used to growing two crops in one year but with the advances in farming techniques, today harvest at least three crops. For most them, the easiest way to clear the stubble left as wastage is burning, experts say.

The government's agriculture ministry discourages the practice but the rush to sow another crop forces the farmers to burn the leftover crop, they say.