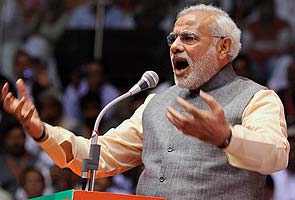 New Delhi: A day after being felicitated and praised by the top BJP leadership, Chief Minister Narendra Modi today virtually set the agenda for the BJP ahead of General Elections 2014. Speaking on the last day of the party's National Council meeting in New Delhi, Mr Modi tore into the Congress, especially the Nehru-Gandhi family and Prime Minister Manmohan Singh, who he called a 'night watchman'.

"Sacrificing the national interest for the interest of one family is the tradition of the Congress," said the saffron strongman as he went straight for the Congress' jugular. "They appointed a night watchman by naming Manmohan Singh as prime minister...the prime minister is nothing but a puppet of the Gandhi family," the chief minister said, as a 2000-strong gathering wildly cheered him.

"Had Pranab Mukherjee been prime minister, there would have been less destruction in the country...Had Pranab been successful, what would have happened to the family?" Mr Modi said, in more barbs directed at the Congress.

But the saffron strongman, while also exhorting partymen to be battle-ready, sought to play down the issue of who the party's prime ministerial candidate would be.

"Who is the person, or who is the candidate, it does not matter in the BJP," Mr Modi said to thunderous applause from the 2,000-strong gathering. The comment is significant in the last few days that have seen a renewed clamour in the BJP for projecting the Gujarat Chief Minister as the party's face for 2014. The sentiment was on full display on Saturday - Day 2 of the ongoing BJP conclave - when party president Rajnath Singh heaped fulsome praise on Mr Modi, referring to him as a "popular chief minister", even as senior party leaders and other members gave the latter a standing ovation.

"The country is sinking. The poor are under the burden of price rise. We cannot even feel if there is a government at the Centre or not," he said.

"BJP is with a mission and Congress is for commission," Mr Modi sarcastically remarked, referring to the numerous scams that the Congress-led UPA government has been battling with.

Promoted
Listen to the latest songs, only on JioSaavn.com
"If you want to rid India of the pest (deemak) that is Congress, the ideal medicine is the effort (paseena) of BJP," the chief minister said. And almost like a clarion call to party workers to rout the Congress, the chief minister rounded off his speech with another Hindi couplet, "Mana ki andhera ghana hai, par diya jalana kahan mana hai"

The address by Narendra Modi at the party conclave today points towards a growing acceptance within the BJP of his stature at the national level as also of being the top contender from the party for the prime minister's post. So far, crucial allies like Nitish Kumar's Janata Dal(United) have, in no uncertain terms, made its reservations known on Mr Modi's potential candidacy as prime minister, given the taint of the riots in 2002. But the chief minister has, in the recent past, found support from several senior BJP leaders who have publicly backed him for the country's top job. With the record third consecutive win in Gujarat, Narendra Modi has only further been able to prove his naysayers wrong, firmly cementing his place as arguably the most popular leader of the BJP.