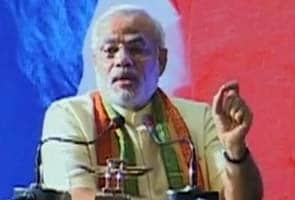 Kolkata: Terming the UPA government at the centre as the "most hated since Independence", Gujarat Chief Minister Narendra Modi on Tuesday mocked Prime Minister Manmohan Singh asking how he can lead the nation when his own party "did not accept" him as a leader.

"Probably UPA is the most hated government since Independence. I have never seen such hatred and anger among the people against any other government. It did not take any credible step to solve any problem. It must be ensured that the UPA government is uprooted," he said addressing BJP workers in Kolkata.

"If you ask 100 Congress workers as to who is their leader no one will name Manmohan Singhji, irrespective of he being the Prime Minister. When his own party does not accept him as the leader of the party and as the leader of the country, then how can such a prime minister lead a nation?" he asked.

Referring to the issue of power centres within the Congress party, he said, "nowhere can I see any sign of power. Then where from such discussions over power centres arise I don't know".

"The entire world was laughing at our country for the corruption that surfaced during Commonwealth Games. The entire show was managed by Congress and later on it was seen that crores of rupees were looted but Congress is not willing to take the responsibility," he alleged.

He also accused the Centre of policy paralysis and claimed that it has floundered on several issues, including the Italian Marines, Bangladesh and Pakistan's beheading of Indian soldiers.

"It is astonishing that Italian Marines, accused of killing Indian fishermen, were allowed to go to their native to vote, while even if the mother of an Indian accused dies he is not allowed to go for her funeral," he said.

Slamming the "poor" foreign policy of the Congress regime, Mr Modi said even small nations did not give proper respect to India, the largest democracy.

"Why should even a small country respect India when our own foreign minister goes to the UN and reads out a speech meant for some other country?" he asked.

The minister was apparently referring to the 2011 fiasco involving the then External Affairs Minister S M Krishna who inadvertently read out two paragraphs of the speech of his Portuguese counterpart at a United Nations meeting following a mix-up.

Mr Modi claimed that the UPA was surviving on borrowed time.

"They (UPA government) are not watching the calender, but the clock. It is on borrowed time."

The foreign business community, Mr Modi claimed, was apprehensive of setting up business ties with India fearing policy paralysis of the UPA government.

Mr Modi alleged that even after the Supreme Court asked the central government to give away surplus rice to the poor, the government gave it away at a nominal price to liquor making companies.

While UPA government boasts of ushering in the RTI regime in the country, most of the people were not allowed to access important information needed by them, he claimed.

Promoted
Listen to the latest songs, only on JioSaavn.com
Mr Modi claimed that BJP-ruled states would top the charts of providing good governance and development if a survey was done.