Anmol Kale, was arrested in connection with Gauri Lankesh's killing, he will be produced before a court in Maharashtra's Pune district. 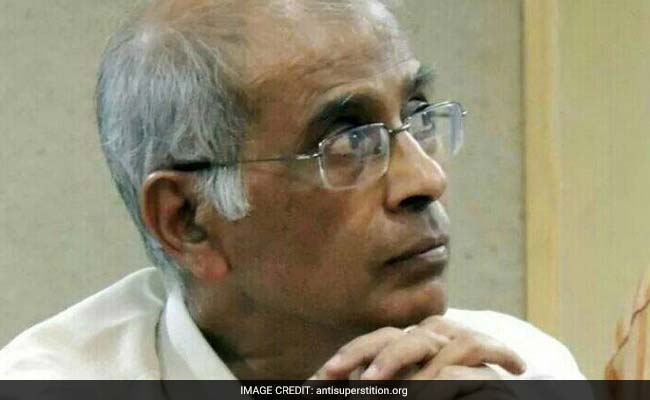 Narendra Dabholkar was killed in Pune on August 20, 2013

The Central Bureau of Investigation (CBI) has taken Amol Kale, the prime accused in journalist Gauri Lankesh murder case, in its custody in connection with its probe in rationalist Narendra Dabholkar's murder case, an official said Thursday.

The CBI suspects that Amol Kale is also the mastermind of Narendra Dabholkar's killing, he said.

Amol Kale, who was arrested in May this year by the Karnataka Police's Special Investigation Team (SIT) in connection with Gauri Lankesh's killing will be produced before a court in Maharashtra's Pune district, he said.

Narendra Dabholkar was killed in Pune on August 20, 2013, while Gauri Lankesh was shot dead outside her residence at Bengaluru in Karnataka on September 5, 2017.

The official claimed that during Amol Kale's interrogation, his alleged role in Mr Dabholkar's killing also came to light.

Amol Kale and Sachin Andure, the alleged main shooter in Mr Dabholkar's killing, had met in Maharashtra's Aurangabad district and also stayed there in a lodge, he said.

During his stay in Aurangabad, Amol gave a pistol to Sachin and it was passed to the latter's brother-in-law Shubham Surale, the official said.

The pistol was found last month at Sachin Surale's friend Rohit Rege's residence in Aurangabad during raids by the CBI and the Maharashtra Anti-Terrorism Squad (ATS).

The seized pistol was sent to a forensic science lab for analysis and the ballistic report is yet to be known, he said.

The CBI wants to interrogate Amol Kale to find out about his alleged role in the Dabholkar case and in this connection, the probe agency Wednesday took his custody from a prison in Bengaluru, he said.

During the course of investigation, the CBI is likely to confront Sharad Kalaskar, the other alleged shooter in the Dabholkar case, with Anmol Kale, and two others arrested in Gauri Lankesh's murder case - Amit Digvekar and Rajesh Bangera, another official said.

The agency had claimed earlier that Amit Digvekar and Rajesh Bangera were also involved in the Dabholkar murder conspiracy.

It had arrested the duo in the Dabholkar case last week.

Sharad Kalaskar was arrested last month by the Maharashtra ATS in connection with an alleged conspiracy to carry out blasts in the state.

The ATS had claimed that during interrogation, Sharad Kalaskar revealed that he and Sachin Andure were involved in the Dabholkar murder, following which it tipped off the CBI which then arrested Sachin Andure.

The CBI took Sharad Kalaskar's custody from the ATS on Monday.