Nandan Nilekani, Wife Pledge Half Their Wealth For Philanthropy

The "Giving Pledge" was created by Bill and Melinda Gates and Warren Buffet in August 2010 to encourage billionaires to dedicate the majority of their wealth for philanthropy. 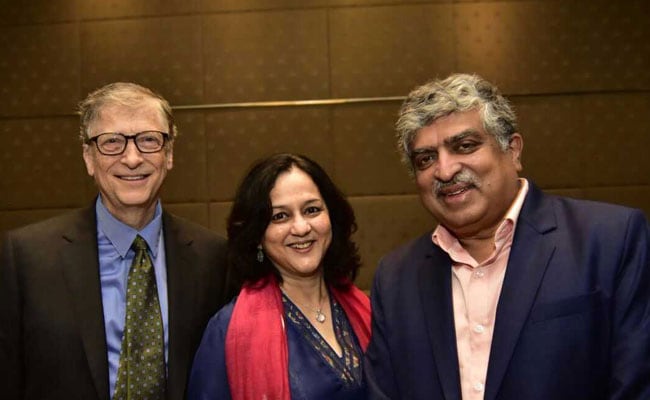 The Nilekanis were the fourth among Indians to sign up for the "Giving Pledge" after Wipro chairman Azim Premji, Biocon chairman Kiran Mazumdar-Shaw and Sobha Developers Chairman Emeritus PNC Menon. With the addition of the Nilekanis, there are 171 pledgers from 21 countries.

The letter the Nilekanis wrote while signing up for the cause, quoted a verse from the Gita and went on to say, "we have a right to do our duty but no automatic right to the fruits from the doing. So it is the idea of action itself that should motivate us much more than the ego-driven desire for its results..."

"I'm amazed by how @NandanNilekani has lent his entrepreneurial passion to philanthropy. I'm delighted to welcome him and his wife Rohini to the Giving Pledge," Bill Gates tweeted.

The Infosys Cofounder's response read: "Thanks, Bill! Our philanthropic journey of two decades has been led by Rohini's passion and commitment!"

Promoted
Listen to the latest songs, only on JioSaavn.com
Nandan and Rohini Nilekani have been part of various philanthrophic initiatives over the last two decades. Rohini Nilekani runs Arghyam, a foundation focusing on water and sanitation issues. In 2014, the couple also founded Ekstep, a non-profit that provides an open learning platform for every child.

Mr Nilekani has recently returned to Infosys as its Non-Executive Chairman after Vishal Sikka, who was the company's CEO, quit. Mr Sikka's exit was the culmination of a long-standing feud between board and founders, especially NR Narayana Murthy, who had raised concern over the corporate governance practices under him.