Defence Minister Nirmala Sitharaman's day-long visit to Arunachal Pradesh and Nathu-La in Sikkim had an unexpected bonus - an exchange with Chinese soldiers, a video of which is viral. 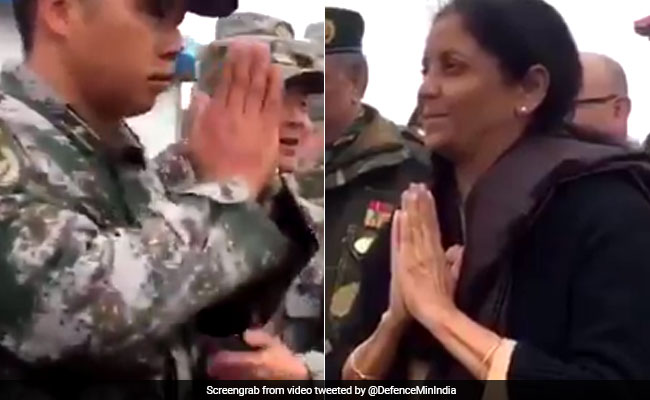 New Delhi: Defence Minister Nirmala Sitharaman's day-long visit to Arunachal Pradesh and Sikkim, including the border at Nathu-La on Saturday had an unexpected bonus - an exchange with Chinese soldiers, a video of which was widely shared on social media.

The video, tweeted by the Defence Minister's official Twitter handle this morning, shows Ms Sitharaman chatting with Chinese soldiers at the border at Nathu-La in Sikkim. In the short clip, the Defence Minister is seen greeting troops with her hands folded in a "namaste."

"Namaste! You know what 'namaste' is?" she asks a Chinese soldier who is acting as a translator.

"Nice to meet you," guesses the Chinese soldier, smiling.

"What would you say in Chinese?" asks the minister.

One by one, the Chinese soldiers present greet the minister with enthusiastic "namastes" and "ni haos".

Ms Sitharaman's aerial survey of the Doklam-Nathu La area came a day after the government clarified there had been no new developments since the disengagement.

In mid-June, Indian soldiers had crossed the Sikkim border to stop the construction of a Chinese road near the "Chicken's Neck" -- a thin strip that links India to its northeastern states. A face-off followed at Doklam plateau, with soldiers from both sides staring down at each other standing just 150 m apart.

The Doklam Plateau is claimed by both Beijing and Bhutan as their territory. India backs Bhutan's claim.

Promoted
Listen to the latest songs, only on JioSaavn.com
After nearly 70 days, the conflict, described as the worst in decades, subsided with both countries accepting that they were withdrawing their troops.

Snippet of Smt @nsitharaman interacting with Chinese soldiers at the border at Nathu-la in Sikkim yesterday. Namaste! pic.twitter.com/jmNCNFaGep

Since being posted to Twitter this morning, the video has already been 'liked' over 5,200 times and retweeted over 3,000 times.

"Raksha Mantri ji proved that she's not only a good administrator but an able diplomat too," comments one person on Twitter. "Love the Chinese captain, very cool and relaxed and very respectful to our Raksha Mantri. Good English as well," tweets another.

Acknowledged a row of Chinese soldiers from across the fence who were taking pictures on my reaching Nathu La. @DefenceMinIndiapic.twitter.com/7cWImtmfLG

Earlier, Ms Sitharaman posted a photo showing her smiling and waving at Chinese troops across the border. "Acknowledged a row of Chinese soldiers from across the fence who were taking pictures on my reaching Nathu La," the accompanying tweet read.