My Agitation Won't Give Rise To Another Kejriwal: Anna Hazare

Anna Hazare also took a dig at Prime Minister Narendra Modi over his promise of "achche din" in the run-up to the 2014 general elections. 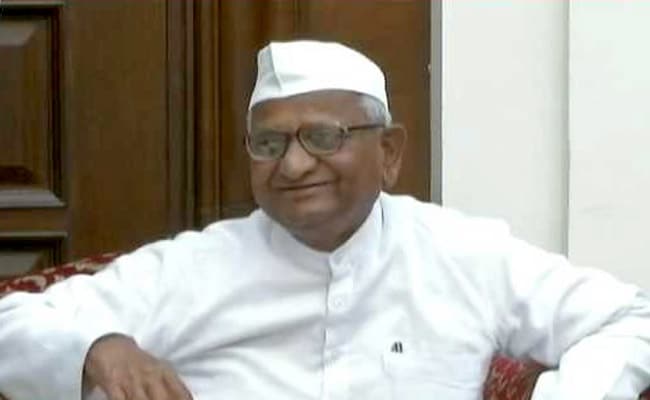 New Delhi, India: Social activist Anna Hazare Monday said that his planned agitation against the Centre would not give rise to "another Kejriwal", referring to his one-time protege Arvind Kejriwal who later went on to become the Delhi Chief Minister.

The anti-corruption crusader said he was going to take affidavits from those joining his movement in March that they would not join politics later.

Mr Hazare also took a dig at Prime Minister Narendra Modi over his promise of "achche din" in the run-up to the 2014 general elections. He alleged that rather than appointing an anti-corruption ombudsman, the Centre brought amendments that weakened the Lokpal Act.

"No, no other Kejriwal will emerge from my protest now. I am getting affidavits from those supporting me that they will not join politics," he said on the sidelines of an event here.

He was delivering the keynote address, titled 'Towards Corruption Free India', at a Business Conclave at SRCC Sports Complex here.

The 80-year-old activist said that his anti-graft movement during the UPA government had seen three of his aides turning into a chief minister, a governor and a minister, in an oblique reference to Arvind Kejriwal, Puducherry Lt. Governor Kiran Bedi and Delhi Deputy Chief Minister Manish Sisodia.

Mr Hazare exhorted the youth to join his protest beginning March 23 against the Centre, which he said had "once given us hope to bring achche din".

"The Centre in one hand pledges to make a corruption-free India and on the other, takes steps to weaken a law meant to curb graft," Mr Hazare said.

He also criticised the prime minister for his "unfulfilled" promise of bringing back black money allegedly stashed in foreign countries.

"The government has not even deposited Rs 15 in our bank accounts, let alone the promise of Rs 15 lakh," he said, referring to PM Modi's pre-election promise of bringing back black money and distributing it among the people.

He urged PM Modi to go beyond making announcements, and act instead.

"Narendra Modiji has weakened Lokpal law by presenting an amendment in Parliament on July 27, 2016. The amendment bill was passed in Lok Sabha in just one day, without any debate.

It was introduced in Rajya Sabha on July 28, and on July 29 it was sent to the President for his approval. The law...was weakened in just three days," he said.