Chief Minister Yogi Adityanath was on his first visit to Ayodhya after he took oath in March. He visited the makeshift Ram temple at the disputed site. 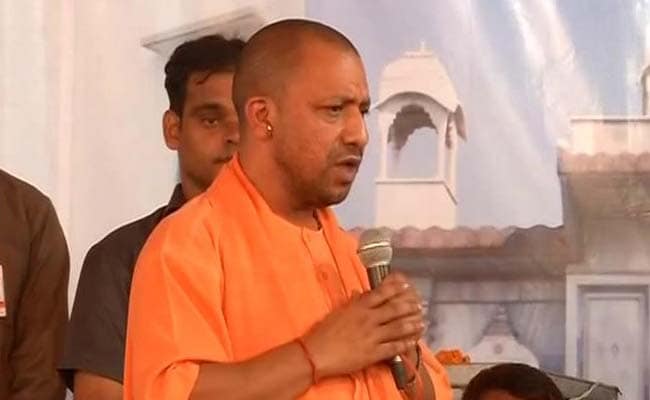 Yogi Adityanath made his first visit to Ayodhya after taking charge as Uttar Pradesh Chief Minister.

Ayodhya: Uttar Pradesh Chief Minister Yogi Adityanath made a pitch for a Ram temple in Ayodhya today, saying decks had been cleared by the Supreme Court for a settlement through dialogue of the Ram Janmbhoomi - Babri Masjid dispute. He said many Muslim organisations favour the construction of a Ram temple at the disputed site.

"We respect your feelings. There should be talks for the construction of a Ram temple in Ayodhya. Many Muslim organisations in Lucknow have talked of handing over Ram Janmbhoomi to the Hindus," the Chief Minister said. He was on his first visit to Ayodhya after he took oath in March, and spent the day there visiting temples, including the makeshift Ram temple at the disputed site and promising better development of the town with an investment of Rs 300 crore, for which he gave credit to Prime Minister Narendra Modi.

Yogi Adityanath was greeted in Ayodhya with chants of "Jai Shri Ram" and said, "Whenever one visits Ayodhya Dham, one can't stop oneself from chanting Ram's name." He was there, he said, to attend birthday celebrations for Mahant Nritya Gopal Das of the Ram Janmabhoomi Nyas, a trust formed to promote and oversee the construction of a Ram temple in Ayodhya.

The 46-year-old priest-politician's visit came just a day after senior BJP leaders LK Advani, Murli Manohar Joshi and union Minister Uma Bharti were charged by a Lucknow court with conspiracy to demolish the 16th century Babri masjid. The mosque was razed in December 1992 by kar sevaks or volunteers, who wanted a Ram temple built at the spot.  Many Hindus believe that the mosque was built by the Mughals over the birthplace of Lord Ram.

The timing of Yogi Adityanath's visit has added to speculation on whether the Ram temple agenda, pushed to the backburner by the BJP for years amid a court battle, is being brought back by the party with an eye on the 2019 national election. It hopes to replicate its unprecedented feat in the last election of winning 71 of the state's 80 parliament seats. Prime Minister Narendra Modi will seek a second term in 2019 and UP will be crucial.

On Tuesday, Yogi Adityanath was waiting with flowers to greet Mr Advani and other BJP leaders as they arrived at a Lucknow guest house on Tuesday morning and held a meeting with them before they left to appear in court. The BJP has defended its leaders saying they "are innocent and will come out unscathed". The party is under pressure to come good on its promise of a Ram temple now that it rules both at the Centre and in UP after its massive sweep of the assembly elections in the state in March this year,

Promoted
Listen to the latest songs, only on JioSaavn.com
Yogi Adityanath has for many years been considered a Hindutva symbol of the BJP and his poll campaigns have consistently held the promise of the construction of a Ram temple in Ayodhya.

"I see no politics in the Chief Minister's visit. He had come here earlier too when he was not CM. ... as far as the Babri case goes you are well aware of the sentiments of the Hindu community in Ayodhya town that a Ram temple should be built here," said Mahant Raju Das, a priest who has served at the Hanuman Garhi temple, the second most famous religious site in Ayodhya, since he was four years old. He is 44 now. Yogi Adityanath visited Hanuman Garhi before he offered prayers at the makeshift Ram temple.
Comments
Yogi AdityanthAyodhyaRam TempleBabri MasjidBabri Masjid Case