Mundka fire: The AAP alleged that the BJP-ruled North Delhi Municipal Corporation allowed the unauthorised construction of the building, where the massive fire broke out last week. 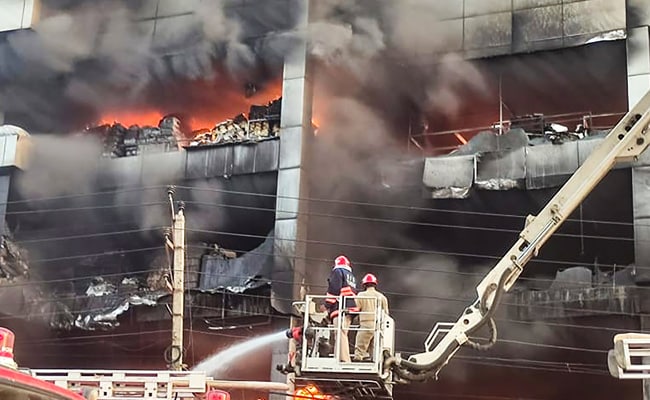 The AAP on Wednesday held Delhi BJP chief Adesh Gupta and his predecessors Manoj Tiwari and Satish Upadhyaya responsible for the death of 27 people in the Mundka fire tragedy and demanded that a case of "unintentional murder" be lodged against them.

The Arvind Kejriwal-led party alleged that the BJP-ruled North Delhi Municipal Corporation (NDMC) allowed the unauthorised construction of the building, where the massive fire broke out on May 13, as well as industrial activities on its premises, in violation of rules as bribes were paid for it.

It demanded that a probe be conducted to ascertain who took the bribes.

The demand by the Aam Aadmi Party (AAP) came a day after the NDMC, following the Mundka fire incident, suspended three officials, including a licensing inspector, in the Narela zone for "prima facie" laxity on their part.

"With the suspension of these three MCD officials, it has been proved that BJP president Adesh Gupta, his predecessors Manoj Tiwari and Satish Upadhyaya are responsible for the death of the 27 people," AAP spokesperson Saurabh Bharadwaj told a press conference here.

He said the NDMC let "unauthorised" industrial activity continue in the building where the fire broke out even though a Supreme Court-appointed committee had sealed it.

The unauthorised industrial activity continued there because the building owner Manish Lakra, who has been arrested in connection with the case, was "a BJP man" and had close links with the leaders of the saffron party, including Master Azad Singh, the uncle of West Delhi MP Parvesh Verma, Mr Bharadwaj charged.

Mr Upadhyaya, Mr Tiwari and Mr Gupta have been the successive Delhi BJP presidents during the time the building was being constructed, when unauthorised commercial activities began on its premises and when the fire tragedy occurred, he pointed out.

"Whenever we talked about corruption in the MCD and its building department, they came out to defend during their respective terms. Why was (Mr) Gupta giving a twist to the fire incident? Did he take a bribe?" Mr Bharadwaj asked.

"They are responsible for the deaths of the 27 people.... We demand that an FIR be lodged against them for unintentional murder and a probe conducted to ascertain if the bribe went only to their hands or did they share it with top BJP leaders also," he said.

On the BJP's accusation that the Delhi government had given permission for opening a liquor shop in the building, the AAP leader said the excise department gave its approval to the shop as the then assistant commissioner of the NDMC's Narela zone had issued a "false" no-objection certificate in 2016, stating that the building could be used for commercial activities.