The Indian Counsellor made these remarks after a Pakistani diplomat misused the platform provided by the UN to "propagate false and malicious propaganda" against India. 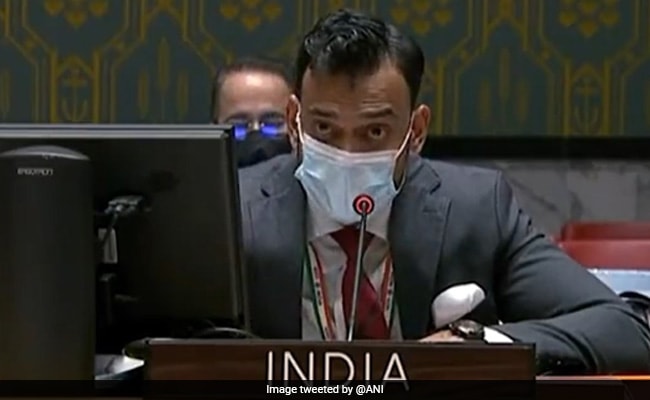 Underlining threat posed to civilians from terrorism, India on Tuesday said the perpetrators of the 2008 Mumbai terror attack continue to enjoy the patronage of Pakistan.

During a UNSC debate on "Protection of civilians in armed conflict, India said member states are well aware that Pakistan has had an established history of harbouring, aiding and actively supporting terrorists.

The remarks by Counsellor in India's Permanent Mission to the UN, R Madhu Sudan came at the UNSC debate on "Protection of Civilians in Armed Conflicts."

The Indian Counsellor made these remarks after a Pakistani diplomat misused the platform provided by the UN to "propagate false and malicious propaganda" against India.

"This is not the first time that the representative of Pakistan has misused platform provided by the UN to propagate false and malicious propaganda against my country and seeking in vain to divert the world's attention from the sad state of his country, where terrorists enjoy free pass and likes of ordinary people and especially those belonging to the minority are turned upside down," he said.

The Indian Counsellor noted how member states are well aware that Pakistan has had an established history of harbouring, aiding and actively supporting terrorists.

"This is a country that has been globally recognised as a sponsor of terrorism and holds the global record of hosting the largest number of terrorists proscribed by the Security Council. So much so, terrorist attacks around the world today, has its origin, in some form or other in Pakistan," he said.

Madhu Sudan reminded the Security Council that Pakistan's Prime Minister and Foreign Minister have been called out for supporting terrorists including Osama Bin Laden but they continue to carry down the same path undeterred.

"We are discussing the protection of civilians today. The biggest threat to civilians comes from terrorists. As we mentioned earlier, the perpetrators of the heinous terror attack in Mumbai in 2008, continue to enjoy the patronage of the state she represents," he added.

Madhu Sudan said India desires normal and neighbourly relations with all countries including Pakistan and is committed to addressing outstanding issues if any peacefully in accordance with the Shimla Agreement and the Lahore Declaration.

"However, any meaningful dialogue can only be held in an atmosphere free of terror, hostility and violence. The onus is on Pakistan to create such a conducive atmosphere. Till then, India will continue to take firm and decisive steps to respond to cross border terrorism," he added.