Mumbai gang-rape case: the most brutal of the five accused arrested, brave survivor says she wants to work again 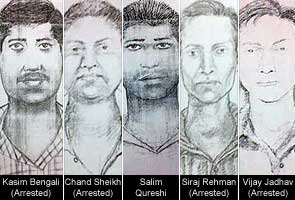 File photo of the sketches of the five accused

Mumbai: Three days after the gang-rape of a young photojournalist in Mumbai, the Mumbai police arrested the fourth accused, Kasim Bengali, who said to be the most brutal of the five attackers.

The police say Kasim Bengali was the most violent of the gang that accosted the girl and her colleague at the abandone Shakti Mills compound on Thursday evening. He had raped the girl twice.
The sexual assault in the heart of Mumbai, usually considered one of India's safest cities for women, has triggered outrage across the country.

The survivor, who was interning at a local English magazine, remains in hospital and is recovering well from internal and external injuries, said doctors attending to her. "Rape is not the end of life; I want to get back to work," she is reported to have said to Nirmala Samant Prabhawalkar, a member of the National Commission for Women, who visited her in hospital.

The police say all four accused are now blaming each other for the savage assault that has outraged the nation.

The grandmother of Chand Sheikh, the first suspect to be arrested, has even claimed that he been incorrectly described by the police as a 19-year-old and that he is actually 16, which would entitle him to a trial in a court for juveniles.(Read)

Sarana Bai met NDTV at the small home where she lives with Chand in a slum that's a 15-minute walk from Shakti Mill.

She was on assignment with a male colleague in South Mumbai when two members of the gang approached them and struck up a conversation. An hour later, the journalists decided their assignment was complete. As they were heading out, the two men returned along with a third. They accused the couple of being involved in a murder that had taken place at the mill. The woman was separated from her colleague during the conversation. After he was tied up, the three men phoned another two to join them, the police said. (Read:Girl's colleague took cops around crime spot, identified rapist)

Promoted
Listen to the latest songs, only on JioSaavn.com
The woman has told the police that her attackers held a broken beer bottle above her head to deter her from shouting for help. The young woman's mother called her twice and she was ordered to answer it without giving away a hint of the nightmare she was going through. (Read:Broken beer bottle held over Mumbai gang-rape survivor's head)

The attack has underscored how vulnerable women remain in India's biggestcities despite the introduction of a tougher anti-rape law to punish sexualcrimes that was introduced after a young woman was fatally gang-raped on a busin Delhi in December, provoking massive street protests.  (Watch:The Mumbai incident reminded me of my child, says Delhi braveheart's mother)