Flanked by his son and party president Akhilesh Yadav, nephew Dharmendra Yadav and others, Mulayam Singh cut a cake amid loud cheers from party workers at the SP headquarters in Lucknow. 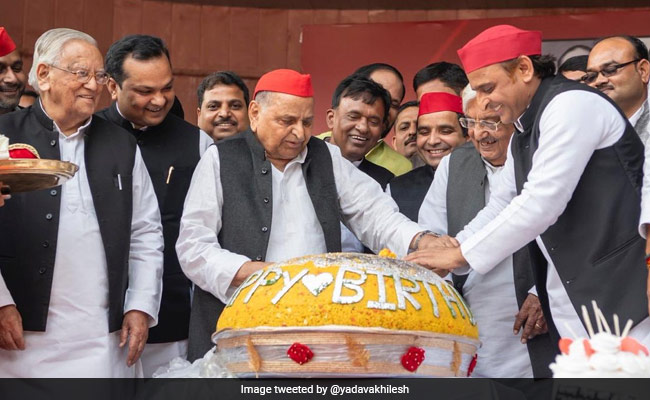 The 80th birthday of Samajwadi Party founder Mulayam Singh Yadav was on Friday celebrated by SP president Akhilesh Yadav and his estranged uncle Shivpal Singh Yadav with much fanfare -- at two separate events.

The leader was present at one. At the other, his absence was conspicuous.

Flanked by his son and party president Akhilesh Yadav, nephew Dharmendra Yadav and others, Mulayam Singh cut a cake amid loud cheers from party workers at the SP headquarters in Lucknow.

SP leaders there presented him with an 81-kilo "laddoo''.

In his speech to party workers, he said they should also celebrate the birthdays of poor people in their villages and offered to attend such events.

In Etawah, 200 km away, his brother Shivpal Singh Yadav, who heads the breakaway Pragatisheel Samajwadi Party Lohia (PSPL), held a separate event where he organised a ''dangal'', a reminder of the leader's past as a wrestler.

He also launched a book, titled "Lohia Mulayam.in" and prayed for a long life for his brother, PSPL spokesperson Deepak Misra said.

At the party headquarters, Mulayam Singh Yadav thanked SP workers for the event, but also urged them to celebrate the birthdays of the poor in their villages.

He said a woman in Bundelkhand had set up an organisation that helped celebrate such birthdays. It helped the SP get votes in Bundelkhand, he added.

He asked party workers to inform him when they celebrate such birthdays and said he will take part in them.

"I would also ask party workers to raise their voice against the atrocities being committed on poor people. This would help people gain confidence that it is only the SP which gives respect to the poor," he said.

He said this will enhance the party's credibility.

"Always oppose injustice and side with right. By doing so, the SP will become the most important party. There are several problems facing the country and party men need to raise them," he said.

Mulayam Singh Yadav said he wished that they achieve the stature he enjoys.

The SP founder was seen embracing his old party colleagues.

Banners and hoardings were put up outside the party office, which wore a festive look with workers dancing and distributing fruit and sweets.