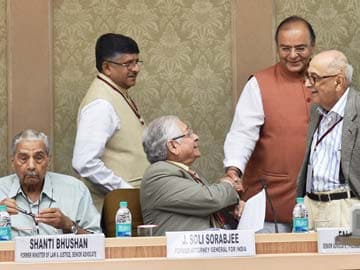 New Delhi: At a meeting convened today by the Centre, the predominant views among the jurists was that the collegium system of selection of judges of the Supreme Court and high courts had failed, and that it had to be changed.

"The predominant view is in favour of changing the collegium system. The government will decide what to do next," Attorney General Mukul Rohatgi told NDTV after the meeting.

"There was consensus for improvement and need for change. By and large there was consensus on transparency," said Union Law Minister Ravi Shankar Prasad. But he refused to elaborate on the course of action to be adopted by the government. "I can't say what we will do and it is not appropriate for me," Mr Prasad added.

The meeting was attended by former Chief Justices of India, eminent lawyers, former law officers, and legal experts. It was part of the exercise started by the NDA government to seek a review of the collegium system. The Law Minister had last week written letters to leaders of various political parties inviting their views on the appointments for higher judiciary and the setting up of a judicial commission.

Press Council of India chairman Markandey Katju's disclosure that three former Supreme Court Chief Justices had made "improper compromises" to grant extensions to an additional judge of the Madras High Court has forced the government to seek a review of the collegium system.

The government is not satisfied with provisions of the Judicial Appointments Commission Bill, which was introduced in Parliament last year by the previous Manmohan Singh government. The bill was passed by the Rajya Sabha, but got stuck in the Lok Sabha. It lapsed after the 15th Lok Sabha was dissolved in February this year.

The Judicial Appointments Commission Bill sought to replace the collegium system with a six-member selection panel for appointing judges of the High Courts and the Supreme Court.

Promoted
Listen to the latest songs, only on JioSaavn.com
The selection committee envisaged by the bill is to be headed by the Chief Justice of India, and will have as its members two judges of the Supreme Court, the union law minister and two eminent citizens.