Over 130 Roads Shut For Traffic As Heavy Rain Batters Gujarat

Monsoon news and updates: Incessant rain has hampered normal life in many areas of Gujarat. The weather office has warned of more rain on Saturday and Sunday. 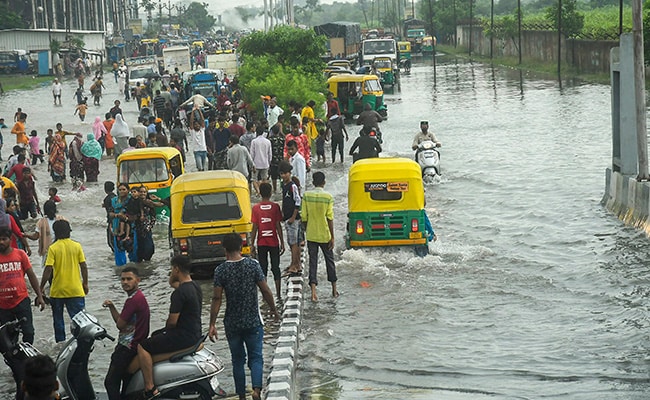 Monsoon 2020: Commuters wade through a waterlogged street in Surat, Gujarat

Monsoon 2020: As many as 131 roads in Gujarat, including a national highway and seven state highways, were shut for traffic as heavy rain battered several parts of the state on Friday, officials said. With the formation of a low-pressure area, some parts of the state are likely to get very heavy rainfall on Saturday and Sunday, the India Meteorological Department (IMD) said.

Incessant rainfall since Friday morning resulted in water-logging and traffic chaos. The state government said that moderate to heavy rainfall was recorded in Kutch, north and south Gujarat today.

The Meteorological Centre in Ahmedabad predicted heavy rain in parts of the state on August 22 and 23. "A well-marked low pressure area is currently over the eastern Madhya Pradesh and it is moving towards Gujarat. This system would bring widespread rain," Director of the Met Centre, Jayanta Sarkar said.

"Owing to incessant rain since the beginning of this month, Gujarat has already received 89 per cent of the season's average rainfall," Mr Sarkar added.