Mohan Bhagwat spoke at an event that the RSS, the ideological mentor of the ruling BJP, said it has organised to make the organisation better understood.

Mohan Bhagwat was speaking at an RSS event in Delhi's Vigyan Bhavan.

If an outreach was the aim, reach out it did. Mohan Bhagwat, chief of the Rashtriya Swayamsevak Sangh, opened a three-day conclave in Delhi on Monday with a rare conciliatory tone for one of its harshest critics. "In the form of the Congress, a huge freedom movement fledged in the nation. It too gave birth to a number of all-sacrificing great personalities who continue to inspire us today. That movement managed to inspire ordinary people to join the freedom struggle. It had a huge hand in us achieving Independence," he said.

That the words came from the head of an organisation which has been the bull's-eye for most Congress darts on the ruling party (which in turn has not missed many opportunities to return the favour) made it the kind of political spectacle perhaps last seen only in Congress chief Rahul Gandhi's famous hug for Prime Minister Narendra Modi in parliament two months ago.

Mr Bhagwat, 68, was speaking at an event that the RSS, the ideological mentor of the ruling BJP, said it has organised to make the right-wing organisation better understood. 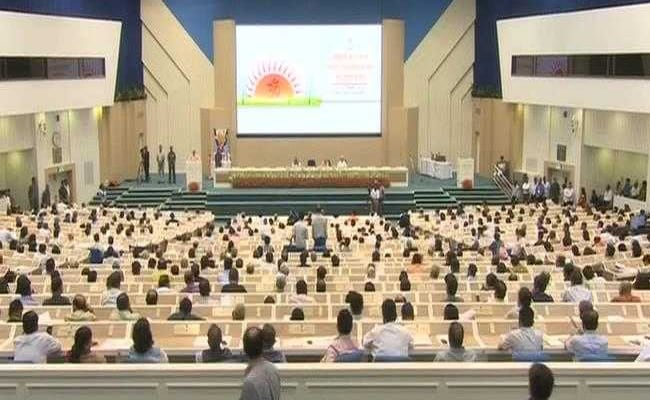 And from diversity to women, the RSS chief in an 80-minute address seemed keen to re-mould its image on more than one issue.

"India is a country full of diversity and it must be respected and celebrated," he said, adding that it should not become a reason for "discord" in the society.

Addressing a frequent criticism about the lack of women participation in the RSS, Mr Bhagwat said there was room to change that and added there are other groups within its umbrella where they do take part.

The RSS, which was an organisation unlike any other, is targeted by many people in the country out of "fear" of its increasing power which is natural, he said.

Though many leaders of the ruling BJP, a number of Bollywood actors, artists and academicians were present for the event in Delhi's Vigyan Bhavan, usually the venue for major government events, almost all major opposition parties gave the conclave a miss though the RSS had invited them.

With two more days to go, Mr Bhagwat appeared to count on drawing more people as he gave out a teaser for Tuesday's subject: Why the RSS is seen as an organisation that seems to court only Hindus.