The portrait's colour red has been thoughtfully chosen as it is the main colour of the Chinese state flag and the ruling party. The colour also symbolises luck, joy and happiness in the Chinese culture. 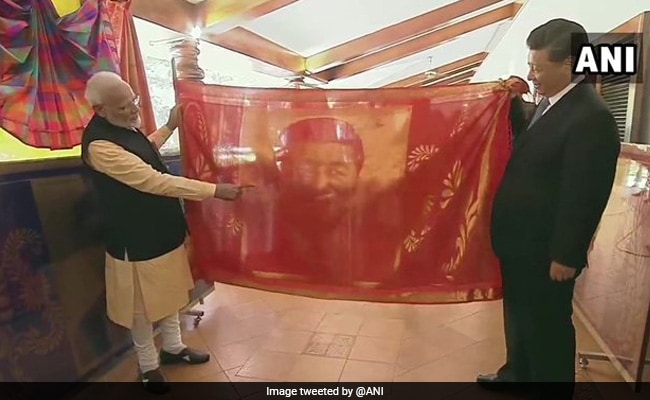 PM Modi and Xi Jinping held the 2 sides of the red and gold silk portrait and posed for photo.

Chinese President Xi Jinping was gifted a hand-woven portrait of his by Prime Minister Narendra Modi on the final day of the Mamallapuram Informal Summit.

The Chinese President's portrait has been intricately woven in zari or golden threads on red mulberry silk with floral patterns on both sides. The portrait has been specially-crafted by the master weavers of Sri Ramalinga Sowdambigai Handloom Weavers Co-operative Society in Coimbatore.

The portrait's colour red has been thoughtfully chosen as it is the main colour of the Chinese state flag and the ruling party. The colour also symbolises luck, joy and happiness in the Chinese culture.

A 240 Hooks Electronic Jacquard was used to encode the portrait pattern into the design punch cards that created thread patterns, which the weavers used.

The weaving of silk is an ancient and treasured craft that has been perfected over generations by the weavers guarding their distinctive patterns and designs. Tamil Nadu is home to many such silk traditions that are often named after the ancient towns around which they developed. Kancheepuram, Arani, Madurai, Coimbatore and Rasipuram are some examples of these timeless classical traditions.

Earlier in the day, the two leaders visited exhibition of artefacts and handloom at the Taj Fisherman's Cove hotel where the summit took place.

PM Modi explained to the Chinese President about the artefacts, including the significance about the tall brass traditional lamp.