On Friday, the two world leaders agreed that India and China need to work together to fight "radicalisation and terrorism as common challenges", the government said in a late-night press briefing. 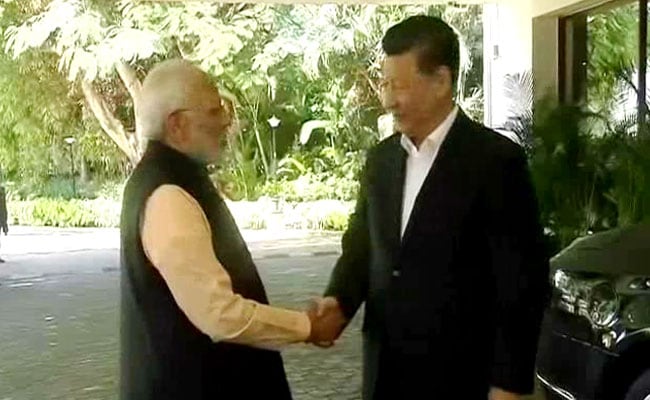 On Friday, PM Modi, dressed in a Tamil attire of veshti, white shirt and an angavasthram, took Mr Xi for a guided tour of the famous world heritage sites of Arjuna's Penance, Krishna's Butterball, the Pancha Ratha and Shore Temple in the ancient temple town, kicking off the second informal summit between the two leaders.

The two world leaders agreed that India and China need to work together to fight "radicalisation and terrorism as common challenges", the government said in a late-night press briefing.

Here are the live updates of day-2 of PM Modi-Xi Jinping meet:

I would also like to express my gratitude to all political parties and socio-cultural organisations of Tamil Nadu for the support and hospitality during the India-China Informal Summit in beautiful Mamallapuram. pic.twitter.com/7BZAPLCW4A

Oct 12, 2019 13:44 (IST)
Modi-Xi Jinping Meet: New Focus On People To People Connect
"There is a new focus on people to people connect in the two countries," Foreign Secretary Vijay Gokhale told reporters. "President Xi also noted India's investment in China, especially in the pharmaceutical sector," he added.
Oct 12, 2019 13:41 (IST)
"Both leaders agreed that the reformed dialogue structure after the Wuhan summit has significantly improved communications between both countries. President Xi also said that the informal summit should continue and lead on for future leaders as well," Foreign Secretary Vijay Gokhale said.
Oct 12, 2019 13:39 (IST)
Modi-Xi Jinping Meet: Buddism A Common Connect
Buddhism is a common connect between northern parts of the country and China, the centre told reporters today after the key meet between PM Modi and China's Xi.
Oct 12, 2019 13:37 (IST)
Modi-Xi Jinping Meet: India, China To Develop New Trade Mechanism
A number of issues were discussed at the second informal summit between PM Modi and Xi Jinping. including trade and tourism, India said today after the key summit. The two countries will explain a new trade mechanism for trade mechanism, the centre said at a press briefing.
Oct 12, 2019 13:30 (IST)
Xi-Modi summit ends as Chinese President leaves for Nepal.
Oct 12, 2019 12:19 (IST)

Oct 12, 2019 12:11 (IST)
Modi-Xi Jinping Meet: Overwhelmed By Your Hospitality, Says China's Xi
"We are really overwhelmed by your hospitality. Me and my colleagues have felt that very strongly. This will be a memorable experience for me and us," China's Xi Jinping was quoted as saying by news agency ANI.
"Yesterday Prime Minister as you said, you and I had engaged in candid conversations like friends, heart to heart discussions on bilateral relations." he added.
Oct 12, 2019 12:06 (IST)
Modi-Xi Jinping Meet: Deep Cultural, Trade Relations Between India And China, Says PM
"The Wuhan summit instilled a new momentum and trust in our relations and today's 'Chennai vision' is the start of a new era in India-China relations," read a statement by PM Modi, news agency ANI reported.
"The first informal summit between India and China last year in Wuhan led to fresh stability in our relations and gave a fresh momentum. Strategic communication between our two countries has also increased," the statement further added.
"There have been deep cultural and trade relations between China and the state of Tamil Nadu. For most part of the last 2000 years, India and China have been economic powers," PM said.
Oct 12, 2019 12:03 (IST)
At the delegation-level talks with China's Xi Jinping, PM Modi said that the China vision has helped in starting a "new chapter in our relationship". "Had in depth discussions on Bilateral relations. We decided not to allow disputes to be created," PM Modi said in a statement.
Oct 12, 2019 10:57 (IST)
For the second day of the summit, the Prime Minister opted for a Kurta and Pajama, along with his statement Modi jacket. He had carried out all engagements on the first day of the summit in traditional Tamil attire, including a veshti, white half-sleeved shirt and angvastram.
Oct 12, 2019 10:20 (IST)
PM Modi recieves Xi Jinping at Taj Fisherman's Cove Resort and Spa in Chennai as the second round of informal talks between the two leaders begin.
Oct 12, 2019 09:55 (IST)
PM Modi, Xi Jinping To Meet Soon
Xi Ping has left the ITC Grand Chola hotel in Chennai for Taj Fisherman's Cove Resort and Spa for his one-on-one meeting and lunch with PM Modi.
Oct 12, 2019 09:32 (IST)
PM Modi Cleans Beach Ahead Of Xi Meet

Plogging at a beach in Mamallapuram this morning. It lasted for over 30 minutes.

Also handed over my 'collection' to Jeyaraj, who is a part of the hotel staff.

Let us ensure our public places are clean and tidy!

Let us also ensure we remain fit and healthy. pic.twitter.com/qBHLTxtM9y