Will Not Raise National Flag Till J&K's Own Flag Back: Mehbooba Mufti 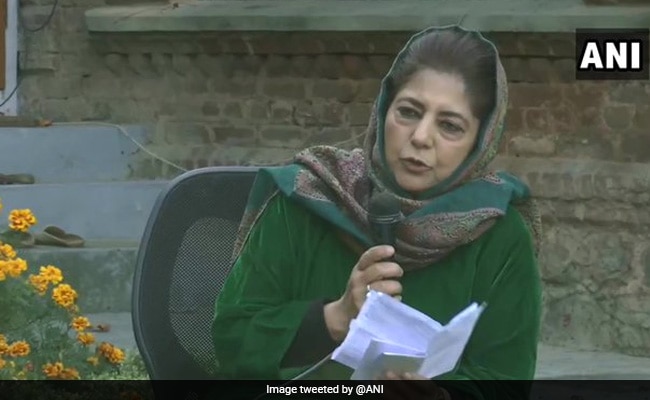 PDP chief Mehbooba Mufti - in her first press conference since being released from 14 months of detention - said she would not raise the national flag until Jammu and Kashmir's flag, constitution and status (as under Article 370) were restored. Ms Mufti also said "those who feel we have abandoned Kashmir are mistaken".

In a scathing attack on the centre - she called them "robbers" who had stolen constitutionally-guaranteed rights - Ms Mufti also said her party would not "abandon the constitutional battle" to reclaim special status withdrawn by the centre in a contentious decision taken in August last year.

"Those who feel we will abandon Kashmir are mistaken," she said, adding that she would not contest any election until Article 370 is restored. "I have contested elections under our own constitution. How can I contest elections when that constitution has been abolished," she said.

There were strong visual signals of Ms Mufti's intent at today's press conference. The former Chief Minister kept two flags on her desk as she addressed reporters - that of her party (the Peoples Democratic Republic) and the erstwhile flag of J&K.

"A robber may be mighty but he has to return the stolen goods. They demolished the constitution... Parliament had no power to take away special status," she told reporters.

"Now it is time for leaders to sacrifice for the cause. Even if leaders need to shed their blood for the cause... Mehbooba Mufti will be the first to offer it," the PDP chief said, adding the fight would not restricted to the restoration of article 370 but include the resolution of the Kashmir issue.

"One day they will fall at our feet and ask for resolution. It is a political fight and (we) will achieve (our) goal," Ms Mufti said.

After National Conference leader Farooq Abdullah, also a former chief minister, was released from a similarly prolonged period of detention, key political leaders in J&K - including the JKPC's Sajjad Lone - have come together to fight for the restoration of Article 370.

Political leaders from J&K, including Ms Mufti, Farooq Abdullah and his son Omar, were detained for months as part of measures taken by the centre to prevent backlash against announcing its decision to withdraw special status and bifurcate the former state into two union territories.

Ms Mufti was released last week while the Abdullahs were released in March.