Sunny Deol's attendance in parliament has also been less than impressive. In the very first session, he was absent for 28 days and attended only nine sittings, according to records. 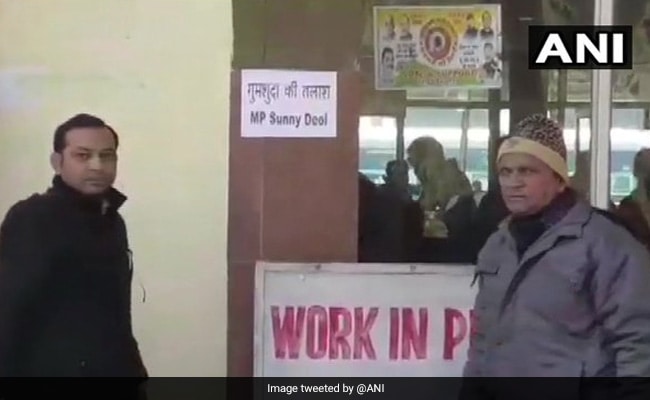 Actor-politician Sunny Deol, declared "missing" in posters that have surfaced at a few public places in Pathankot in Punjab, posted a message to his critics in a video on Facebook. "Gumshuda ki Talash (search for missing), MP Sunny Deol," read the posters that can be seen at parks and the railway station.

"I have heard that my detractors are coming up with nonsensical things against me," the actor said in the video on the posters. "Opposition leaders should work for the welfare of people. I am also working to resolve the traffic congestion in the city. Wish you all a happy Lohri," Sunny Deol said.

The 63-year-old actor, who debuted in politics last year, won his first Lok Sabha election as a BJP candidate from Gurdaspur. He defeated Congress MP Sunil Jakhar in a triangular contest that also featured the Aam Aadmi Party (AAP).

Soon after, Sunny Deol was criticized for nominating writer Gurpreet Singh Palheri as his representative in his parliamentary constituency, to "attend meetings and follow important matters" on his behalf. Critics said it proved the actor had no intentions of giving his 100 per cent to his new role.

Sunny Deol's attendance in parliament has also been less than impressive. In the very first session, he was absent for 28 days and attended only nine sittings, according to records.

On the "missing" posters, Congress leader Manish Tewari said: "Not surprising... same thing happened to his father Dharmendra in Bikaner. Gurdaspur missed the chance of a good man @sunilkjakhar representing them again.Would have added to @INCIndia's strength in Parliament."

Sunny Deol is the third member of his family to join politics and the BJP. His father Dharmendra was also BJP MP in the past and his step-mother Hema Malini was elected MP for the second time last year. Dharmendra was also criticized for years and accused of neglecting his constituency Bikaner in Rajasthan.

A section in his constituency may seem upset but the actor has pulled his weight as star campaigner for the BJP in polls in Haryana and Jharkhand.

He also attended the opening of the Kartarpur corridor along with Prime Minister Narendra Modi in November and tweeted photos from the event. The corridor links Darbar Sahib in Pakistan, the final resting place of Guru Nanak, to Dera Baba Nanak shrine in Gurdaspur.