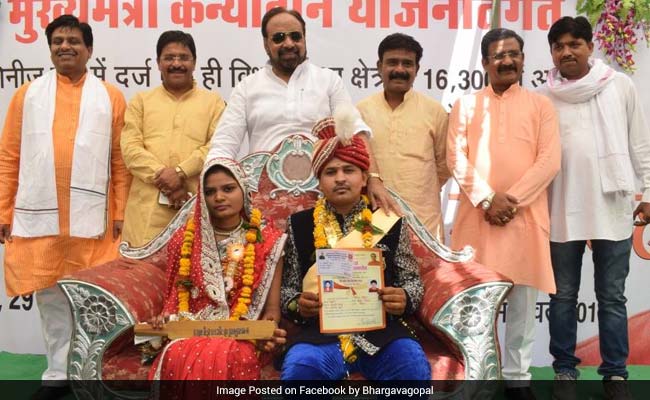 Gifting the bats at a mass marriage ceremony on Saturday, the minister instructed the brides to use it on husbands if they become alcoholics or harass them, refusing to mend ways.

"The idea of gifting mogri struck me when a woman asked me whether she should get her husband to stop drinking by beating him with this wooden plank," said the minister of panchayati raj and rural development.

"Whenever I visit any rural or urban area in my constituency, women complain about their husband's drinking habit. They inform me that whatever little they earn is snatched away by their husband for alcohol. They (women) are also subjected to physical violence," Bhargava told the Press Trust of India today.

He ordered 10,000 bats to be gifted to women "suffering at the hands of their alcoholic husbands". Each 'mogri' is engraved with caption 'sharabiyon ke sutara hetu bhent, police nahi bolegi' (gift for beating drunkards, police will not intervene).

Mr Bhargava feels that the bats are a step towards bringing social change, necessary to deal with the menace of alcoholism.

"The government or police alone would not be able to solve this problem. For this, people have to come forward. There are many examples in history which show that when masses intervene, things have changed for the better," he said while presenting the wooden bats on Akshaya Tritiya in his home town Garhakota in Madhya Pradesh's Sagar district.

The minister asked women to first talk to their husbands about the problems of drinking.

If that doesn't work out, let the 'mogri' do the talking, he added.

Sale of illegal liquor is a major issue in Madhya Pradesh. "An atmoshphere is being created in the entire state against liquor but people need to be educated on the issue. It is essential before declaring prohibition," he added.

Promoted
Listen to the latest songs, only on JioSaavn.com
Mr Bhargava also asked the new brides to plant saplings, stop all illegal activities in their villages and ensure that children get proper education.