"Only One Cure For Them": Minister's 'Threat' To Jamia, JNU Protesters

"Those at JNU and Jamia who shout anti-national slogans, there is only one cure for them. Have 10 per cent quota from western UP...everyone will be cured and nothing else will be needed," Union Minister Sanjeev Balyan said at a rally in Meerut. 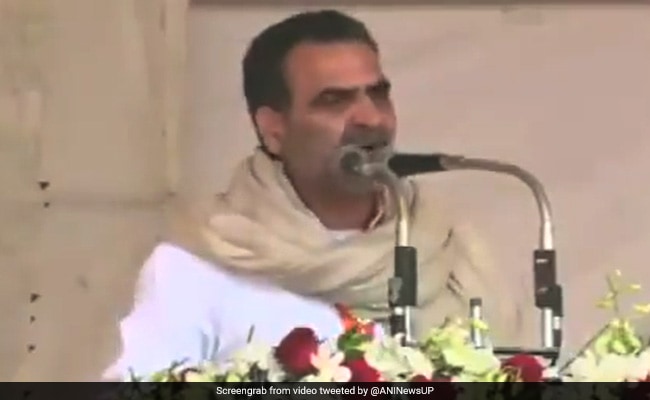 Union Minister Sanjeev Balyan was an accused in the 2013 Muzaffarnagar riots.

Union Minister Sanjeev Balyan, known to get away with incendiary and divisive comments, declared on Wednesday that he knew the "right cure" for students of Jawaharlal Nehru University (JNU) and Jamia Millia Islamia, where there were clashes recently during protests against the citizenship law. Set aside 10 per cent seats in the universities for people from western Uttar Pradesh, he said at a public rally.

"I request (Defence Minister) Rajnath Singh-ji. Those at JNU and Jamia who shout anti-national slogans, there is only one cure for them. Have 10 per cent quota from western UP...everyone will be cured and nothing else will be needed," Sanjeev Balyan said at a rally in Meerut.

Western Uttar Pradesh is known to be a relatively seamier part of India's largest state, where the rate of crime is higher.

Thousands, including students in multiple cities and towns, have taken to the street since last month to protest the new citizenship law that they say discriminates against the minority Muslim community. Violence broke out at Delhi's Jamia Millia Islamia university last month during a protest against the citizenship law; the police were accused of using excessive force on students. Earlier this month, masked goons attacked students and teachers at JNU, triggering nationwide outrage and protests.

Mr Balyan is Minister of State for Animal Husbandry, Fisheries and Dairying in the current government and was also a junior minister in Prime Minister Narendra Modi's first term.

The BJP MP has often made headlines for his outrageous comments. Last month, he sparked a huge controversy by suggesting that "children from Madrasas" had a role in violence during protests against the Citizenship (Amendment) Act, in which 23 were killed.

He was an accused in the 2013 Muzaffarnagar riots, in which more than 60 people were killed and thousands displaced.

Mr Balyan was among the leaders accused of making incendiary speeches at a large gathering or Mahapanchayat, after which communal clashes erupted. He has denied the charges or any role in the riots.

The BJP leader was fielded despite his controversial record and elected to the Lok Sabha in 2014 from the Muzaffarnagar constituency. In last year's election, he won again and was made a minister.