Globally, lockdowns enforced to stop the virus's spread have put 91% of learners out of school. 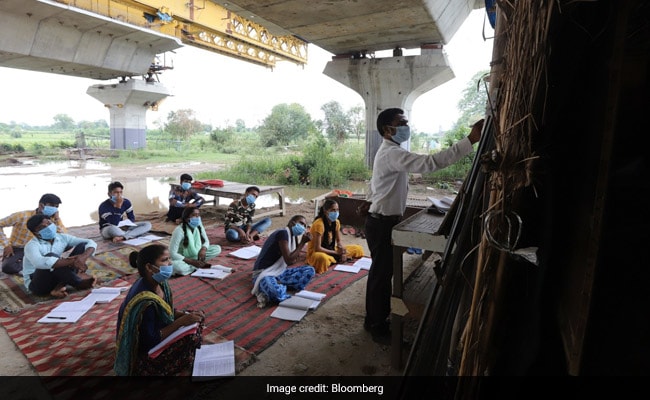 In India, the government spends about 3% of the nation's gross domestic product on education.

The coronavirus has pushed schools all over the world to go online as new waves of infections keep emerging. In India, a country where the gaps in access to education and the Internet were already vast, poor families are struggling to stay the course.

Shirin Riyaz Shah, 15, attends a small private school in Mumbai. There's one smart-phone between her and her four siblings over which they sit through Zoom lessons and submit homework via WhatsApp. Their schedules don't blend neatly and there's a constant tussle over the phone.

Data is especially precious because money, always tight, is now in even shorter supply as the pandemic stretches her family's single income. Her father is a tailor and for now, movement restrictions mean he's mostly home. When that changes so will the children's access to his phone.

And digital classrooms make the process of learning harder.

"In class we can raise our hands over and over again and it isn't a problem," said Shah by phone. "We can ask teachers to pause in a class and then ask them to repeat. But in a video call if two or three students do this then time will run out."

The pandemic has led to the "biggest global education emergency of our lifetime," according to a report by the Save The Children Fund. Globally, lockdowns enforced to stop the virus's spread have put 91% of learners out of school. Out of these, the poorest and most marginalized children are at highest risk of never returning to the classroom.

The Struggles of Homeschooling in the World's Tiniest Apartments

In India, where the government spends about 3% of the nation's gross domestic product on education and only half the population has access to the Internet, 320 million students have already been affected, according to Save The Children Fund.

The spokesperson for the Ministry for Human Resource Development and the secretary of the School Education and Literacy department did not respond to an email and or phone calls asking for comment.

"You have one side of the population that's so used to tech, it's like a second language to them," said Shreya Tobias, a volunteer with Teach for India, a non-governmental organization, who educates fourth grade children. Many of her students have never used phones before, and their parents themselves don't know enough to help. "These kids don't have that. Tech is confusing for them."

The majority of her students have seen their parents lose jobs as a result of the economic distress caused by India's protracted lockdown. She lost contact with some when they were forced to return to their villages.

Instead of innovating, governments and schools have gone for the easiest option available, said Shantha Sinha, founder of the research institute Mamidipudi Venkatarangaiya Foundation and the former head of the National Commission for Protection of Child Rights. "It's showing a lack of sensitivity."

Governments must allocate funds to local village councils and encourage solutions from the bottom up, Sinha said. "They should allow people to come together, they should say, 'Come up with an innovation, we will support you.'"

Several rights groups and NGOs have taken this approach -- from reading rooms to distributing books directly to homes -- attempting to fill the gaps left by online education. A village in Jharkhand has seen widespread fame for its use of loudspeakers perched on trees through which children can listen to classes. But these initiatives need to be scaled up quickly, experts say.

Despite the challenges, many teachers and students hold on to hope.

Tobias believes her students will return to classes once lockdowns are fully lifted. "After having worked in this system for a while, I've realized that it takes a lot of effort to get your child into a school, to begin with," she says. "The parents are quite invested."

And 15-year-old Shah is worried but determined.

"This is my aim, and this is my responsibility," she said. "I will not let my future goals be disrupted by anything."